The Dignity of Euthanasia

No one likes to suffer. But even more so, no caring person likes to see another person, especially a loved one, suffer. This is especially the case when it comes to how we feel about the terminally ill trying to endure intolerable pain. Some people propose that the kindest thing we can do for a person in this condition is at least what we would do for any animal- put them out of their undignified misery (read: euthanasia). It is perhaps this motivation that has led Mr Nick McKim to introduce a Private Members Bill, Dying With Dignity 2009. (A copy of the Dying With Dignity 2009 Bill can be found here.) But there is another way of looking at this problem. Rather than thinking that euthanasia is the solution, it may exacerbate a whole set of other even worse problems. 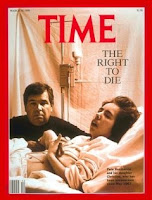 Here's some of the main points that I think that we need to be aware of and why we should play a role affecting the outcome of this Bill.


* Allowing this Bill to be passed would send a desperately sad message to those providing palliative care for the terminally ill; those involved in suicide-prevention among vulnerable teens; the elderly who feel pressured to stop being such 'a burden' to those around them.

ACTION REQUIRED-
1. We require as many thoughtful and considered submissions to be made as possible. The Parliament has set up an Inquiry which has quietly called for submissions by July 31st 2009.These submissions can incorporate an elaboration of any of the above points but would be enhanced by personal accounts (which pastors perhaps more than many in society should be able to provide) of people close to us who have died with dignity.

Written submissions to the Committee should be addressed to the Secretary, Joint Standing Committee on Community Development, Parliament House, Hobart, 7000, and forwarded prior to the close of business on Friday, 31 July 2009. Hon Kerry Finch MLC (CHAIRMAN). The Committee encourages the lodgement of submissions in electronic form. Emailed submissions must include name, phone number and postal address. Guidelines for witnesses and the preparation of a submission are available here or by contacting the Secretary – Ph: (03) 6233 2248 – Fax: (03) 6233 8103 –Email.

--An Information Pack will be provided to all attendees. RSVP for either events to Nick Overton

I hope to see you at these briefings, and I hope you can make a submission as well.
Posted by The weekly pastoral blog of Dr. Andrew Corbett at 16:27