The spiritual did not come first, but the natural, and after that the spiritual.
First Corinthians 15:46 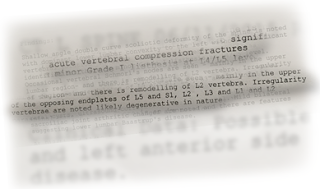 The Apostle Paul told the Corinthians 'first comes the natural then the spiritual'. This is the essence of a portend. This brief explanation is of course unnecessary for those familiar with Lord of The Rings. The word, 'Portend' was used several times in The Hobbit and each time it was used it added an eerie unease about what was about to happen. I recently experienced a portend and it involved my trusty iPad. 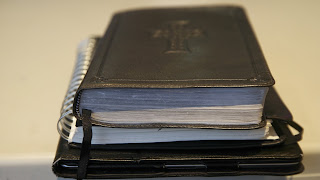 I was packing up my things from my office to head home and uncustomarily I had my iPad under my arm with some Board document folders for a meeting I was off to later that night. (I generally insert my iPad into a special compartment in my backpack. But not this time.) As I reached to turn off the lights in my office the iPad slipped from under my arm and landed on the carpet of my office. "No harm" I thought as I checked it fearing the worse. It turned on and seemed fine and importantly there was no damage to the screen. But then over the coming days my iPad began turning itself off randomly and performing woefully slowly. This was my portend.

I'm not the only pastor who finds it emotionally difficult to take holidays. But I mustered up the where-with-all to request the month of November off. As I approached the first day off my leave I began to notice that two weeks before it kicked in I was stiffening up and my pesky back spasms were flaring up, my sore knees were sorer and my occasional leg cramps were intensifying both in intensity and frequency. "Having a bit of a bad run" I thought to myself. Almost exactly a year earlier I succumbed glandular fever again and about a year before that I experienced another bout of shingles. And around the middle of this year the paroxysmal hemicraniums started. I began signing off my weekly pastoral emails to my church as, "From your frail and flawed Pastor". No one really knew why and I didn't really elaborate that much either.

The day my leave commenced I had to do one more thing to ensure that I could take my leave with all the necessary boxes ticked. As I left that mentoring breakfast meeting I hobbled to my car in pain and feeling intense back spasms. These had started over 5 years ago and my doctor had told me not to worry about them as it was probably just a torn Gluteus Medius muscle. But every few months after that initial diagnosis it seemed I was once again tearing my now pesky Gluteus Medius muscle. I drove to my office to collect some final things from there so I could switch off and commence my leave. As I hobbled into my office I received an acute jabbing pain near my right kidney region and collapsed to the floor. Nothing I could do relieved the pain or even made it comfortable. I lay on the floor in agony for about half an hour both grateful that it was a Saturday and the offices were closed (because then no one could see me or hear me screaming in pain) but at the same time concerned that I couldn't move. "I must have really torn it bad this time" I thought. I rang Kim and she came, brought some Voltaren for me and somehow managed to get me into the back of my car after half an hour or so.

For the next week I was involuntarily bed-ridden. Muscles generally take 3-4 days to come good. After 4 days I was still in intense pain and began to wonder whether this was just soft-tissue damage. On Day 6 my 9 year-old daughter rang the doctor and booked me in. He did some tests and said that my troubles were indeed not coming from damaged Gluteus Medius muscles. More than likely, he said, it was my spine. He arranged for me to have a CAT scan straight away. In the meantime he prescribed Movalis and Tramal SR. If I ever meet the industrial chemists who invented these two gifts to mankind I will shake their hands and buy them a decaf skinny latte to show my eternal appreciation to them.

I rang to get the result of my CAT scan a few days later. It's always a bit of a concern when the nurse says I can't discuss this over the phone, you need to meet with your GP. She made an appointment for me to see him immediately. "I'm sorry to tell you, I only have bad news for you" was one of his initial comments. He then shared some of the main points from two page CAT scan report. None of it was good. "You have the back of a 90 year-old former professional rugby player who has been in a traumatic motor-vehicle accident" he said. "At some point, you have broken your back and your back has made several attempts to repair itself, and in the process it has made things worse." And starting with double scoliosis, Baarstrup's Syndrome, extensive facet joint damage, several herniated discs, nerve entanglement, a compressed neural cortex, he began to go through the list of some of the things which the CAT Scan had detected. He then finished with, "And it's only going to get worse."

Since they only scanned half of my spine, I now have to have an MRI to determine how badly the rest of it might be damaged. This information will be analysed by a specialist neurologist in a few weeks to see if there's any point to attempting treatment or whether I am just given a management plan.

Like my iPad, my damage was not immediately evident. Like my iPad, I now occasionally 'shut down'. Very much like my iPad, everything I now do is much slower. And possibly like my iPad, there may be little to nothing that can be done to rectify my situation. Yet I rest securely in the sovereignty of God. When I came out from the doctor's surgery, I sat in my car stunned for several minutes. I've always considered myself relatively fit and able - and with a strong back! When I read Andre Agassi's book, "Open", I discovered that he too had developed a seriously worn back from playing tennis. The game which I love, and was committed to playing professionally, may have also prematurely worn out my back.


And we know that for those who love God all things work together for good, for those who are called according to his purpose.
Romans 8:28


While all this caught me off-guard, none of it has surprised God. He is sovereign and beautifully so. I don't just preach Romans 8:28, I believe it and worship God with my life because of it! But my challenges are pathetic and utterly inconsequential compared with those of some of my brothers and sisters - especially in those parts of the world where being a follower of Christ comes at an incredibly high price. I conclude elaboration on my recent portend with a beautiful YouTube clip from an Egyptian church in Minya to illustrate my conclusion.

Posted by The weekly pastoral blog of Dr. Andrew Corbett at 16:11 2 comments: