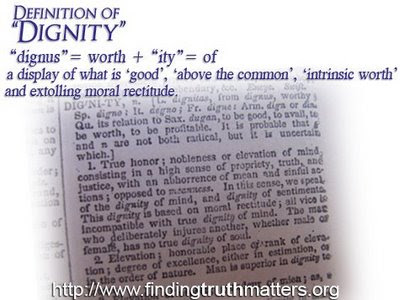 We all want to live a dignified life. Depending on how you regard life- whether from an naturalistic Darwinian evolutionary perspective (mankind is the random result of uncaused, unrepeatable, chaotic activity), or from a Biblical perspective (mankind is the direct creation of God and is uniquely invested with the image of God which endows us with certain sacred properties such as an immortal 'soul', you will either see that mankind must gain dignity or celebrate its dignity.
And it goes without saying that while we would probably want to live a long and enjoyable life most of us would want our dying condition to be without being humiliated, debased, or disrespected. Added to this, most of us would like our lives to end without pain or suffering. Possibly, many of us would also add that we would want our lives to end without them becoming a burden to our family and friends.

Yet, for most people who get old they end becoming how they were when they came into the world: dependent. Similarly, as you get older your body doesn't always respond the way you would like. This can make those you become dependent upon uncomfortable. In fact, in 1995 then Governor General Bill Hayden said that such people can become an unnecessary burden on society.

‘there is a point when the succeeding generations deserve to be disencumbered - to coin a clumsy word - of some unproductive burdens’
The Hon. Governor General Bill Hayden, address to the Royal College of Physicians, 21st June 1995, Brisbane Courier Mail, 26th June 1995

But dignity is still due to the dependent. They should not be pressured to think that the only way to be dignified is to allow others to give them a lethal injection (which sometimes causes toxic shock resulting unrelenting vomiting, uncontrollable convulsing, and prolonged severe shortness of breath).

When a dependent person loses control of vital body functions should they be made to feel 'undignified'?
Interestingly, when voluntary euthanasia was temporarily allowed in the Northern Territory of Australia in the 1990s, making provision for the terminally ill in intolerable pain to have doctor-assisted deaths, of the 7 people that took advantage of the temporary law, few (if any) actually had a terminal illness and none had untreatable pain. In Holland, where there is legalised voluntary euthanasia, up to 1,000 people each year are euthanased without their consent.

One man in Tasmania who cares for over 350 dying people each year, Dr Paul Dunne, said that each of these people despite their physical state dies with great dignity. To legalise Vountary Euthanasia in this State, he said, would be to introduce "a throw away mentality" when it comes to frail and vulnerable people.

Current medical practice is right now able to treat what was once 'intolerable' pain. This is called Palliative Care. Those involved in this field medicine are one of the greatest blessings to any "society". When a doctor helps to relieve a patient's dying pain with ongoing morphine (described by one doctor as one of the greatest blessings from God to the pained) they are activating what is called "The Law of Double Effect". This current practice is not euthanasia since it does not intend to kill a person but it may hasten their death after it has become established that further treatment is pointless.

Despite how others may respond to a person who is suffering and dying, they should never be regarded as worth less - which is what "undignified" means.
Posted by The weekly pastoral blog of Dr. Andrew Corbett at 04:30