THE MOST DANGEROUS IDEA

What has been the most dangerous idea of all time? There have indeed been some dangerous ideas which have shaped cruel dictators and led to the tragic loss of millions of lives. Some ideas have birthed dangerous attitudes which have justified racism, nationalism, and elitism, which have all unjustly deprived people of their natural rights.
The term “dangerous” is relative. Our football team may been “dangerously” close to losing their game if they had not kicked that goal on the final siren. We use the word Danger to mean a “threat” to a comfortable state. It is probably in both senses that a recently aired documentary - “Darwin’s Dangerous Idea” - showed why Darwin’s idea was such a threat to the religious establishment and how it was eventually used to justify “Social Darwinism” as the basis for the Nazi’s eugenics program for example. Ideas have consequences.
Christianity’s most dangerous idea was Jesus Christ: God became a man. Born of a virgin. A sinless life. Amazing miracles. A brutal death. An astonishing resurrection. An ascension into heaven. If these ideas are either legend or myth then Christianity is rubbish. But if they are demonstrably true then they are the most dangerous ideas ever because they confront people with a God who has entered into the story of this world, proven Himself, revealed His will, and warned appropriately. Those who originally announced this lived and died dangerously. Easter is therefore a dangerous message. This Easter I invite you to consider the claims of Jesus Christ and discover why these claims are not just dangerous.
Dr. Andrew Corbett (www.legana.org)
Pastor of Legana Christian Church
Posted by The weekly pastoral blog of Dr. Andrew Corbett at 22:51 No comments:

Jesus prepares to enter the city of His death. He knew what awaited Him and still proceeded!

He gives a remarkable prophetic set of directions to His disciples. Notice how Christ is able to ordain details in order to fulfil His purpose. Don't fall for the trap of thinking that seemingly insignificant events are not in the plan of God for your life.

He fulfils the prophecy of the Messiah by Zechariah. This is a constant point made by Matthew in his account of the life and ministry of Christ to show his readers how Jesus fulfilled the prophecies of the Old Testament.

When He entered Jerusalem the crowds adored Him. "Crowds" are fickle things. Some have noted that this same adoring crowd would within a week cry out "Crucify Him!"

Jesus rides a donkey into Jerusalem. Jesus fulfils all the hopes and dreams of people even though He comes to people out of obscurity and very humbly. He is indeed worthy of praise and is more easily praised in the midst of the crowd.

Father, help us to recognise who Jesus really is and the times when He is working in our lives for our good. Help us to walk with Christ humbly, not seeking our pre-eminence, but living in a way that brings glory to You even though it brings none to us.
Posted by The weekly pastoral blog of Dr. Andrew Corbett at 09:04 No comments:

The Scriptures have some significant things to say about caring for the poor and oppressed that might challenge even the most acceptable social policy...

"...you shall not harden your heart or shut your hand against your poor brother" (Deut. 15:7).

And while charity is commended as an act of compassion toward the poor, it seems that the Scriptures particularly condemn the oppression of the poor. One of the most insidious oppressions of the poor is to deprive them of hope. One of the means of hope for the poor is to give them opportunities.
Interestingly, the Scriptures indicate that God regards the solution to poverty as fairness ("justice") leading to opportunities. This is particularly illustrated in the instructions to 'the blessed' to allow 'the poor' to glean their fields.
¶ “And when you reap the harvest of your land, you shall not reap your field right up to its edge, nor shall you gather the gleanings after your harvest. You shall leave them for the poor and for the sojourner: I am the LORD your God.” (Leviticus 23:22)
Why didn't God command that the wealthy farmer simply go back and harvest the gleanings to give to the poor waiting outside their gate?

Is it fair ("just") to expect the poor to take advantage of the opportunity presented to them to alleviate their poor conditions?
The next time you pray for your needs to be met you might want to consider that God answers such prayers with provision but more likely with an opportunity. Consider that God's Word prescribes "the Gleaning Solution".
Posted by The weekly pastoral blog of Dr. Andrew Corbett at 22:18 No comments:

Who Was the 8th King of Revelation 17?

The first 19 chapters of the Book of Revelation are fulfilled. Written by John around 65AD, the Book of Revelation made some stunningly amazing predictions of the immediate future of Jerusalem and Christianity. So accurately did it predict the events which would unfold over the coming months that it surely causes the reader to marvel at the obvious and glorious way it could only be the result of Divine Inspiration.
For example, in Revelation 17 it describes the imminent destruction of Jerusalem by one of the "seven kings" who is "an eighth king" and belongs to the "ten kings."


they are also seven kings, five of whom have fallen, one is, the other has not yet come, and when he does come he must remain only a little while. As for the beast that was and is not, it is an eighth but it belongs to the seven, and it goes to destruction. And the ten horns that you saw are ten kings... (Revelation 17:10-12a)

In 65AD, there had indeed been the succession of five kings of Rome (1. Julius; 2. Augustus; 3. Tiberius; 4. Claudius; 5. Caligula) and the sixth king Nero, was now reigning and creating havoc for both Jerusalem and Christians throughout the Empire. And indeed the his successor, Vespasian, would eventually put Jerusalem to "destruction". Vespasian was amazingly the next Emperor of the United Roman Empire, making him the 7th king. But before he took office there were three would-be Emperors, Galba, Otho and Vitelius, who in one way constituted an attempt to unite the Empire under their kingship. In this sense, Vespasian was "an eighth king". But if these three would-be Emperors are counted individually, then Vespasian was one of the "ten kings".

John's apocalyptic prophecy of the immediate future of his people was therefore uncannily fulfilled. I discuss this, and other amazing historic references to the complete fulfilment of Revelation chapters 1 - 19 in my eBook- "The Most Embarrassing Book In The Bible - Understanding The Book of Revelation" available from www.andrewcorbett.net. 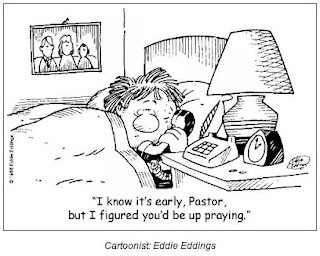 Notice what Paul the apostle seemed to have in his leadership toolbelt based on Romans 15:5? Firstly, he had prayer. He prayed for those he was trying to help. Good leaders are good pray-ers. Parents pray for their children. Husbands pray for their wives. Team leaders pray for their teams.

TOOL #2 Pace
But note what else Paul seemed to have in leadership toolbelt. He was praying for his readers to endure. Leaders help their team go the distance. They do all they can to pace those they are helping. This involves knowing when to ask for more, and when to help them rest well. Endurance is best achieved with a marathon attitude rather than a sprint attitude. But it is a marathon attitude that is punctuated by times of intensity and times of restful celebration. When our family went on our last driving holiday to Queensland, Ruby was only 2 years old. To maximise everyone's ability to enjoy the trip as well the destination we travelled only a few hours a day and took a leisurely pace rather than our usual 12 hours a day of driving. The result was that we stopped and stayed in towns along the Newell Highway that we would never have enjoyed otherwise. Years later we still recollect moments from that holiday and how enjoyable it was.

TOOL #3 Praise
Leaders encourage. When a Dad says to his son or daughter after they've given their best, "Well done. I'm proud of you!"- it carries enormous weight. A leader's encouragement can lift spirits, inspire effort, and impart satisfaction for unappreciated work. But this kind of encouragement is not always as direct as some leaders might think. It often comes in the form of indirect comments that shows that the leader has noticed or that they have been thoughtful. A leader asks questions of those they help. A leader comments not only on the finished work but on the amount of effort invested. A leader listens to a discouraged team member and understands that they are stressed about something other than what they might be complaining about. They then say something that both affirms their team member and invites their team member to be truly honest about what is really troubling them. Many employers have had cranky staff members complain about their work conditions only to later find out that their marriage was under great strain or that their child was recently diagnosed with cancer. There was another point in my pastoral ministry when I was discouraged and feeling low. A senior leader I greatly respected listened to me say how hard it was to grow our church in Legana. After listening to me whinge he offered no advice but he did say one 7-word sentence that filled my inspiration tank for about the next few years.

TOOL #4 Harmony
Leaders help their team to get along. They diffuse disagreements. They correct those team members who cause division. They keep their team united by reminding them of the big picture ("the vision') and the real point to their efforts. Mums and Dads have to use this leadership tool all the time!

TOOL #5 Accordance
And finally, leaders need to have an ability to bring accordance to their team. The kind of accordance that is needed is with Jesus Christ. Often a team member may be out of sorts because they are out of accord with Jesus Christ. A wise leader will encourage his team member to share what they sense the Lord is saying to them or doing in their life. This leader may also invite their team member to pray with them and to seek Christ for His leading and direction.
The leader's tool-belt carries prayer, pace, praise, harmony and accordance. Used wisely, we are are better able to achieve our objective of growing in Christ, knowing Him and making Him known.

Philippians 2:2 complete my joy by being of the same mind, having the same love, being in full accord and of one mind.

Father, please us each to know when to use the right tool to help others. I pray that we can all be better leaders. Help us as a church provide helpful leadership to our communities, schools, workplaces and homes. In Jesus' Name,
Amen

Posted by The weekly pastoral blog of Dr. Andrew Corbett at 20:34 No comments: