Even Jesus found the going hard. He met with ridicule, slander, and hostility. He was therefore qualified to tell His followers to endure.

Hebrews 12:3 ¶ Consider him who endured from sinners such hostility against himself, so that you may not grow weary or fainthearted.

One of the requirements for developing the Christian virtue of endurance is hardship. Hardship looks like difficulties. But it also looks like temptation. I'm sure that elite athletes face constant the constant temptation to slacken off in their training and stop going through the necessary pain of stretching their stamina and muscle tone. But today you don't need to hear from an elite anybody. I have a story to tell...

This week I realised my body shape was going the way of many 40-something year old men who eat more than they need and exercise nothing but their rights. So I decided to do something about it. Starting Sunday morning (the most inconvenient day for a preacher) I started a jogging/running/walking routine. Then from Monday I decided to fast by only eating one meal a day for a few days. But then yesterday (the fourth day of my new routine) it was raining in the morning and I woke up particularly tired, so I didn't do my morning exercises. I also took Kim out to lunch and therefore ate two meals for the day (since she had prepared a special roast for our evening dinner). All was fine until...

Last night my sleep was continually interrupted by leg cramps. Apparently my daily exercise routine had conditioned my legs to need this painful exercise I had introduced it to. So this morning I was back into it. I am enduring the pain and discomfort for a goal I prize. I hope that my endurance is sustained throughout this year.

This Sunday I am going to draw upon one of the most inspirational stories of endurance I have ever heard. As a result the remarkable endurance shown by the leader of the small band of men who feature in this true story, he is now regarded as "the greatest leader in human history ever". See you Sunday for an inspirational time and don't forget our church BBQ after the morning service.

Philippians 3:7-8 But whatever gain I had, I counted as loss for the sake of Christ. Indeed, I count everything as loss because of the surpassing worth of knowing Christ Jesus my Lord. For his sake I have suffered the loss of all things and count them as rubbish, in order that I may gain Christ.

Amen.
Posted by The weekly pastoral blog of Dr. Andrew Corbett at 12:04 No comments:

Posted by The weekly pastoral blog of Dr. Andrew Corbett at 09:21 No comments:

The Gospel's central offer is not - Heaven. Heaven is not even a side benefit to receiving the Gospel. In fact, Heaven is virtually irrelevant to the Gospel. To be sure there is no other way a person can enter Heaven than to accept the Gospel. And it is certainly true that Heaven can only accept those who have been transformed by the Gospel. No doubt Heaven is s place of sublime bliss that will give the Gospel believer the ideal environment for our eternal rewards, But the Gospel is not about Heaven!
The Gospel is about Jesus, not Heaven. Consider this shocking question: If you died and went to Heaven and then discovered that Jesus wasn't there, would you want to be there?
The greatest benefit of the Gospel is that brings a believer into a fellowship with Jesus. This doesn't start in Heaven, it starts here..
As we prepare for what the coming year has for us as a church community, can we consider this shocking question and its implications-


Philippians 3:7 But whatever gain I had, I counted as loss for the sake of Christ.
Phil. 3:8 Indeed, I count everything as loss because of the surpassing worth of knowing Christ Jesus my Lord. For his sake I have suffered the loss of all things and count them as rubbish, in order that I may gain Christ.

Consider Jesus today and this year.

Father, help us to treasure Christ as our Supreme Treasure. Cause us to delight ourselves in knowing Him and being known by Him. May we pray, pray, pray to be in constant union with Christ. May our love for Christ be the single greatest delight of our lives. Help us to be so besotted with Christ that we are transformed by His life, His words, His mission, His cause, and His goals. May we as a church each behold Christ this year together in our community of brotherhood.

Amen.
Posted by The weekly pastoral blog of Dr. Andrew Corbett at 14:50 No comments: 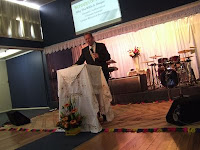 The first Sunday of 2009 I was privileged to speak in a great Tongan church- Westgate Christian Fellowship, in Braybrook Melbourne. The pastor is Salesi Kanongataa and is a great friend. My whole family was with me for this Sunday. I shared with the church on the unique authority of God's Word and the need (especially for Pentecostals) to "test" so-called 'prophecies' by the Scriptures and proven brothers and sisters. 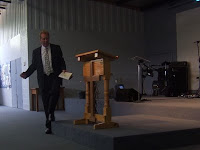 The following Sunday our family was two children lighter (Tyrone was now in Queensland and Zoe in Geelong). The church in Benalla is "Life Church" and it was one of the most impressive churches I have been in for a while. The pastor of Benalla Life Church is Daryl Marshall and he is a great guy. 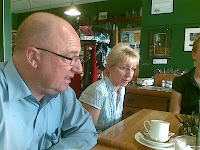 The folk at Benalla warmly received us and made me and the girls (Kim, Ebony and Ruby) feel right at home. I shared with the folks of Benalla an exposition of Ephesians 4:17-21 and emphasised the classical principles of Biblical hermeneutics from this text. We look forward to building the connection with Daryl and Pam and their church.
The third church I spoke at this year was Shepparton Assembly of God. I served in this church back in 1989 as a youth leader. 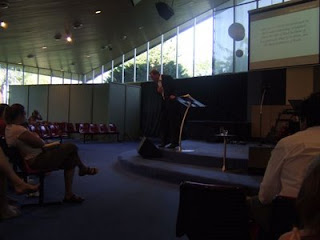 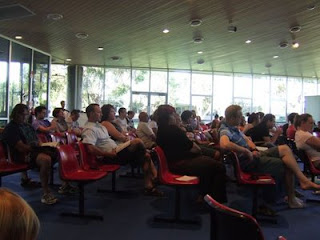 We return to Tasmania this weekend where I will be speaking at the Mersey Christian Church in Latrobe and then Legana Christian Church the following Sunday. The Sunday after this (February 1st) I will ministering in Annapolis, Maryland (USA). I would appreciate your ongoing prayers for these preaching engagements.
Posted by The weekly pastoral blog of Dr. Andrew Corbett at 10:05 No comments:

Of More Worth Than Money

Just a few weeks ago I spoke with a teacher from Lillydale who told me a touching story of a European exchange student who was allocated to this unlikely school. She was a very studious girl who had come to Australia to learn. Yet most of her adopted fellow students did not consider learning the reason they went to school. At the Leavers' Dinner she gave her farewell speech. She shared how that back in her own country education was the most prized acquisition a person could have. As such, she shared, her parents had been making huge sacrifices all her life to ensure that their daughter received the best education that they could nearly afford. Her trip to Australia was a part of her quest to acquire this most valued possession. She then turned her focus off herself and directly toward her temporary fellow students. In Australia, your government gives you an education and most of you have refused to take it! In my country this same education costs two and possibly three lifetimes to repay. If we do not value education and learning we are not going to be able to compete in the marketplace or job-market, and we are consequently looked down upon and considered for the most menial jobs. Her Australian peers listened in stunned silence. They had never considered the enormous privilege that they had just spent the last few years squandering. They had valued amusement (a+muse=no thinking) over education.

What do you value most? The other day Kim asked me what I would quickly grab from our house if I only had a few seconds before it burnt down. It's an interesting question. Would you grab your wallet or your photo album? Would you grab your favourite device or a piece of art?

What would you have if you could have more of one thing?

Jesus said, "Do not lay up treasures on earth...but lay up for yourselves treasures in heaven" (Matthew 6:19-20). Jesus went on to explain- "For where your treasure is, there your heart will be also." (Matthew 6:21) The problem from Christ's perspective isn't 'treasure' but rather, what is 'treasured'. It's not about what things you have- but about what things have you.

For some people, money is their most prized possession. But the Scriptures give us a list of things worth far more than money, and better yet, often don't initially cost money either.

Posted by The weekly pastoral blog of Dr. Andrew Corbett at 17:20 1 comment:

Pastorally, one of the more frequent issues that I have tried to help people with over the past year related to their disappointment with God due to seemingly unanswered prayer.

As I look at Scripture, I see several clues that God gives us that helps us to understand what seems to be unanswered prayer.


The next time you think that God is not listening and consequently not answering your prayers, remember these three truths.

I pray that we will all be pray-ers who are not easily detered from petitioning God for Him to outwork Matthew 6:33 and 1John 5:14 into our lives.

Amen.
Posted by The weekly pastoral blog of Dr. Andrew Corbett at 16:33 No comments: