Abortion is a blight on our nation. It is a highly emotional issue for many people who in their shrill, abandon ordinary decency and plunge into irrationality. The widespread view held in the 1970s that a fetus was simply a part of a woman's body or that the embryo was not human, or that the unborn in the womb feels no pain, have all been debunked now.

Recently a Australian university banned the display of a poster on their campus which pictured an 8 week old unborn baby ("human embryo") and only had the caption- "An 8 Week Old Embryo". 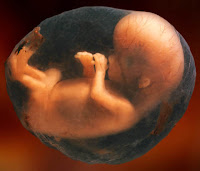 Abortion is probably now the greatest social injustice in the world today. Its legacy is the trauma that thousands of women who have had an abortion (even decades ago) are now experiencing. This is one reason why we launched Hope For Women - to help some of those women who are experiencing Post-Abortion Trauma. The unborn are not the only casualties of abortion.

This Sunday in our church we will have an urgent petition regarding Medicare funding for abortion which I urge you to sign.
Senator Guy Barnett will be presenting a Bill in the Senate to withdraw Medicare funding for abortion. In an interview on ABC radio this morning, Senator Barnett noted that in up to 20% of current abortions in Australia, the child in the womb is older than 20 weeks and is actually birthed alive and left to die. "I find this galling" said Senator Barnett to ABC radio's Tim Cox.

And so should we.

If you wish to download the Petition yourself, then visit-

I commend this petition to you.