BE SKEPTICAL, NOT CYNICAL 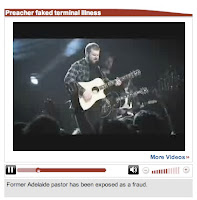 To be skeptical is to be slow to believe. This slowness has to do with processing the proof. Any proof offered for a claim must be tested to determine whether it is sustainable (1Thess. 5:21). While Christians are commended to believe all things (1Cor. 13:7) this does not mean we should be naive in our thinking (1Cor. 14:20). It is reasonable for a Christian to wait for (testable) evidence before they believe a claim such gold-dust falling out of thin air during a worship service, dramatic healings, resurrections, or prophetic messages given supposedly by angels.

In this sense, skepticism in a Christian sense is not being "closed-minded" but rather: "open-minded". That is, the Christian is not "closed" to the idea that what is presented by some sincere (but naive) believers as "from God" may have some quite natural explanation. A Biblically grounded Christian is open-minded to both natural and supernatural answers to certain phenomena.

Yet, despite even the best attempts by mature, Biblically-literate Christians, deception is still possible. It is even more possible when the one deceiving has some credibility. For example, when the son of a highly regarded pastor dupes thousands into believing that he is dying from cancer, it is expected that his claims have been substantiated. This makes his duplicity all the more painful. It is painful for the cause of Christ. It is painful for his family, especially his dad (who deserves to be highly regarded). It is painful for the wider Body of Christ.

Unfortunately, this most recent deception may cause some Christians to move from naiveté to cynicism (refusing to believe despite the evidence) rather than to skepticism (which the Bible encourages). If any Christian feels tempted to become cynical because they have realised their naiveté, they firstly need to be commended for having applied the first part of 1Corinthians 13:7. They now need to apply the last part of 1Corinthians 13:7 which encourages us to endure all things which surely includes the failings of men.

This deception is going to cause a severe loss of credibility for many people who had applied 1Corinthians 13:7 to "believe all things". This is especially so for his family, and perhaps due to his high public profile, his father (who is a genuinely great bloke). One small consolation in all this is the relatively swift and transparent conduct of the ACC Executive. They are to be commended for this.

Skepticism should help us to keep our eyes on Christ and not on the shortcomings of others. This is because we have every reason to trust and believe in Jesus of Nazareth. His claims of peace and true joy through the salvation He offers can be tested and be shown to be trustworthy and reliable. For the person who has come to realise the truthfulness of Jesus Christ yet still doubts, there is an offer from God who loves to help skeptics with their doubts.

Mark 9:24 ¶ Immediately the boy’s father exclaimed, “I do believe; help me overcome my unbelief!”

"Faith" to overcome doubts is described in the New Testament as a gift from God that can help transform not just skeptics, but even cynics.

Ephesians 2:8 ~ "For by grace you have been saved through faith. And this is not your own doing; it is the gift of God"

If you are skeptical that this gift of faith from God is for you, then test this claim for yourself and ask God for it.

Andrew.
Posted by The weekly pastoral blog of Dr. Andrew Corbett at 15:30