THE ROOT OF BITTERNESS...

See to it that no one fails to obtain the grace of God; that no “root of bitterness” springs up and causes trouble, and by it many become defiled;
Hebrews 12:15

I’ve sometimes wondered why Australians tend toward bitterness as a strategy for handling disappointment. Perhaps this started with our ‘Diggers’ in the trenches of Gallipoli. Two mates would be fighting side-by-side in the trenches when one of them would be shot dead. His mate would then look down on his fallen comrade and exclaim that he was a mongrel anyway! 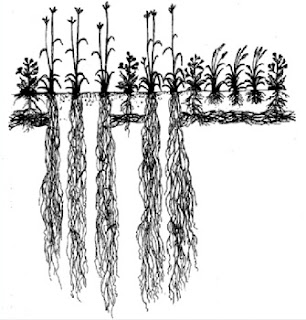 I recently stubbled across an autobiography of a Bible teacher I had heard and enjoyed a few years ago. I learned that his life had been filled with tragedy. A year after becoming a Christian he married another new Christian who betrayed her marital vows and left him with their 3 month old daughter. She divorced him and remarried, twice. He then married againa few years later when he was 27. A few months of being married came to a tragic end when his new wife was killed in a hit-and-run accident. A few years later he married again. This time his marriage lasted and he and his third wife went on to have 4 children. But as I continued to read his biography he began to highlight the faults of his wife. He shared things about his wife that husbands should never disclose. I stopped reading and re-read this portion to Kim and then remarked to her that he though he was about to say this marriage ended too. And sure enough, as I read on, he went further in his criticism of his wife became self-justification and then he wrote: "She left me." A root of bitterness had occured and this was most obvious with his self-justification.

But this disappointment strategy is not just limited to military comrades, spouses, or churches- God Himself is the most common target of bitterness. As people dispute with God over His standards of right and wrong they hear a "nice" voice in their head that affirms their objections to Him- "Has God really said?...He doesn't want you to enjoy yourself because He knows that the moment you do this you will become like Him!"

The safeguard against bitterness is love. Love covers a multitude of sins, shortcomings, faults, and offences.


"Above all, keep loving one another earnestly, since love covers a multitude of sins.”
1Peter 4:8

The root of bitterness sprouts into a deadly weed that climbs up its victim and chokes the life out of them. It destroys fellowship. It ends marriages. It divides churches. It estranges people from God.

But bitterness can neither take root in love or climb up around it to choke it. Therefore, for us to build strong friendships, healthy marriages, great churches and a joyful relationship with God we need to-


This doesn't happen naturally. It demands constant vigilence- that is, we must be continually correcting ourselves when we detect the root of bitterness and the diminishing of love for others. King David did this when he detected discouragement setting in-


Psalm 42:5 ¶ Why are you cast down, O my soul,
and why are you in turmoil within me?
Hope in God; for I shall again praise him,
my salvation.

For us to battle the enemy's seeds of bitterness requires constantly asking God for His grace. It requires humility when we most naturally feel like justifying ourselves. It also requires overlooking offences by not dwelling on them and not retelling them to others (eg- "Did you hear what they said and did to me?"). By doing these things we can avoid the root of bitterness. But what do we do when the seeds of bitterness have already taken root in our souls? If we suspect that something bitter has entered our soul then we should ask God and our church community for help. By meeting in our church community small groups where we share our hearts and pray for needs- both ours and the other groups members', we are tilling the soil of our soul. This disrupts weed growth and promotes good growth.

If however, you suspect that there is bitterness in your soul and you have stopped asking God for deliverance from it- and ceased to be a part of a discipleship (small) group- there is no hope. Hebrews 12:15 is a dire warning against allowing the root of bitterness. According to this verse, if we fail to uproot the sprouting seeds of bitterness we will (i) fail to experience the grace of God, (ii) cause trouble, and (iii) become defiled (in our thinking and behaviour). Therefore, let us guard our souls against bitterness and its fruit (malicious gossip, slander, hate). I suspect that as we continue to experience this season of church-growth that the Enemy will prowl around our church community with a dirty big bag of seeds and sow them willy-nilly in the hope that someone's heart is unguarded and that he can turn their heart against their friends, family, their church, and their God. May God help us to guard our hearts and to fill our souls with love for our friends, family, church and Himself.


After all, we don’t want to unwittingly give Satan an opening for yet more mischief—we’re not oblivious to his sly ways!
2Corinthians 2:11 THE MESSAGE