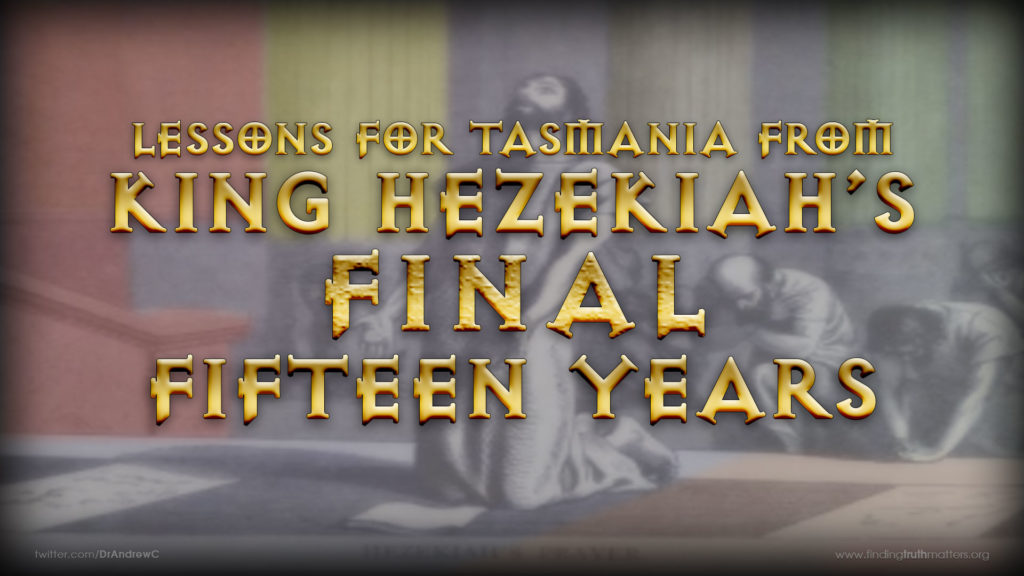 The world empire of Assyria had recently conquered Israel to the north of Judah. Many Israelites had been slaughtered and many more had been deported into exile to Assyria. Now the Assyrians were making the intentions known to the Kingdom of Judah, where Hezekiah, the descendent of King David now reigned. The mighty Assyrian Emperor sent his emissary to Jerusalem to invite them to surrender too before being slaughtered if they refused—they even put it in writing! 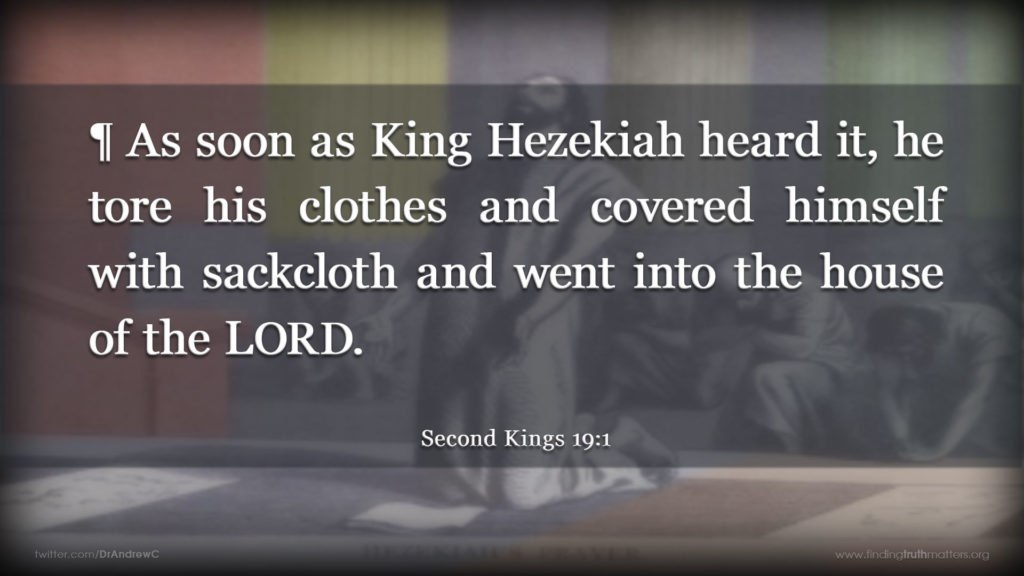 The LORD heard King Hezekiah’s prayer and sent the Prophet Isaiah to him. 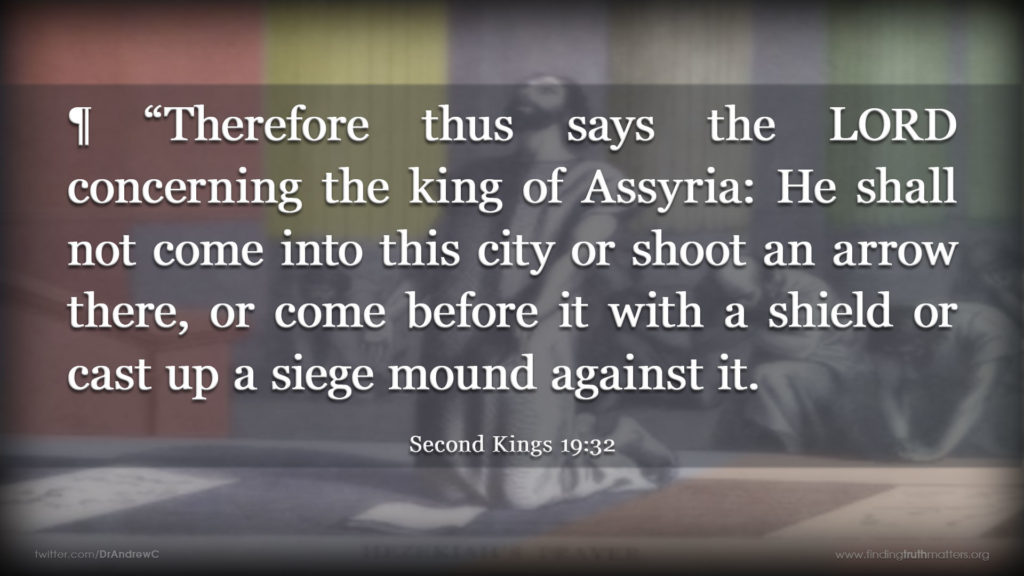 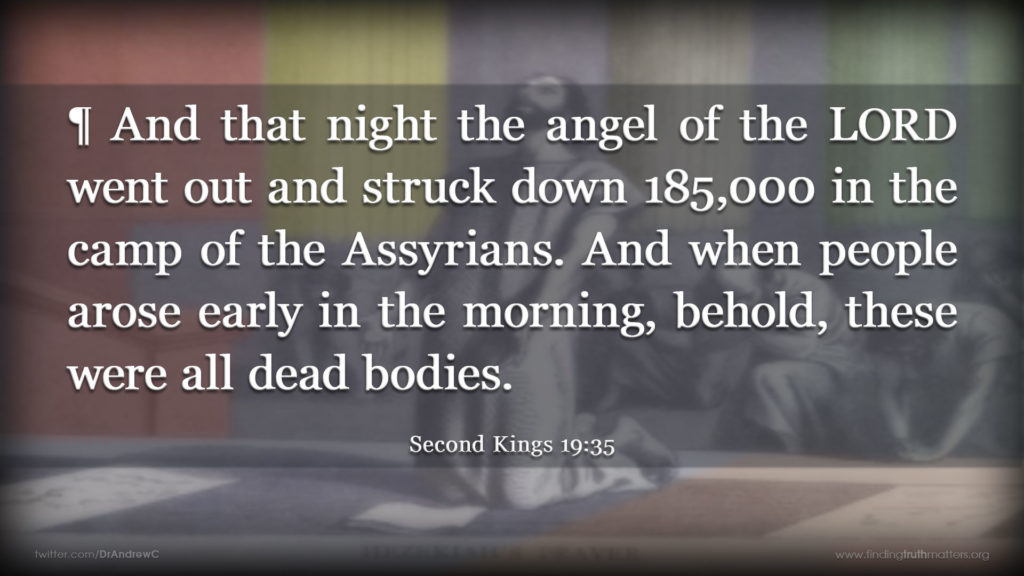 King Hezekiah’s had just experienced one of the most miraculous acts of deliverance in Israel’s history! To top it off, when Emperor Sennacherib returned he suffered a humiliating death.

Then Sennacherib king of Assyria departed and went home and lived at Nineveh. And as he was worshiping in the house of Nisroch his god, Adrammelech and Sharezer, his sons, struck him down with the sword and escaped into the land of Ararat. And Esarhaddon his son reigned in his place.Second Kings 19:36-37

How did King Hezekiah respond after experiencing such a dramatic answer to his prayers and witnessing an extraordinary act of miraculous deliverance? We can only surmise. But if history is anything to go by, then Hezekiah may have responded over time in the way that most such recipients have responded. History almost universally reveals that a person’s spiritual state is inversely proportional to their level of material success and popular acclaim. I cite two examples who immediately support my point: King Solomon, and, Jesus of Nazareth. Perhaps it was God’s grace then that Lord announced to Hezekiah that he was about to die soon. 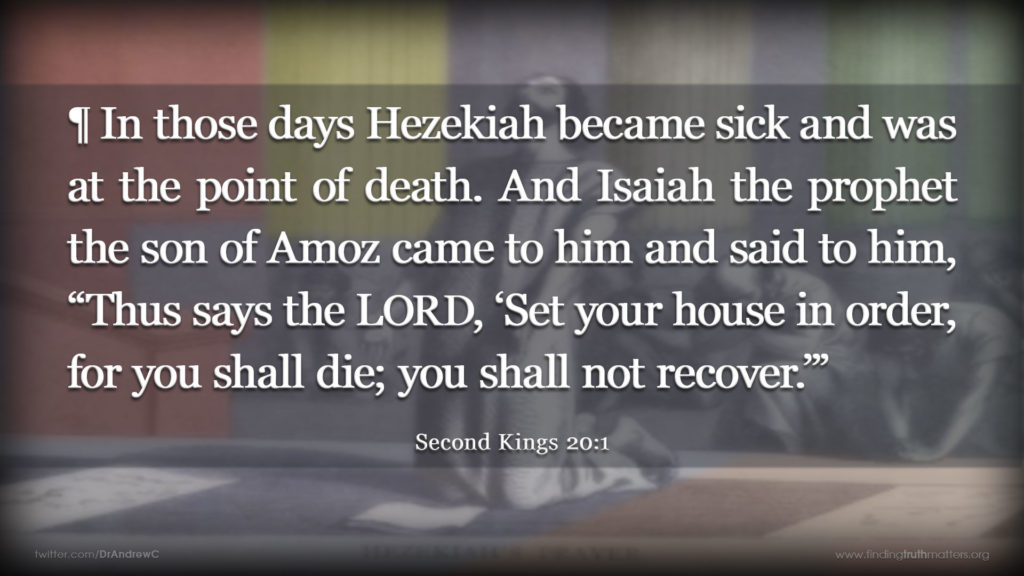 What happened next is one of the most powerful examples of what worship truly is. We see positive examples of a worshipful response to God’s voice in such godly people as Mary, the mother of Jesus.

And Mary said, “Behold, I am the servant of the Lord; let it be to me according to your word.” And the angel departed from her.Luke 1:38 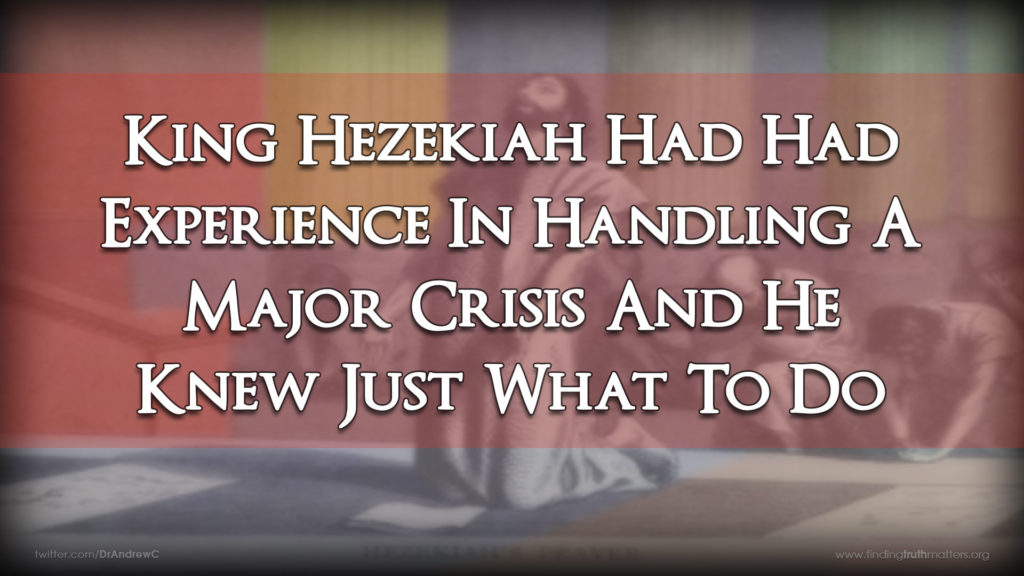 But Hezekiah’s response stands as a biblical warning to all those who seek to be true worshipers of God. His response indicates that there was a growing amount of undetected arrogance in his heart. We some of this same kind of arrogance in Samson who had also become used to experiencing God’s deliverance of him. In his arrogance he ignored God’s Law and pursued the satisfaction of his sensual desires. When he had all but abandoned God and his pledge of obedience to Him, he arrogantly continued to assume that God would continue to deliver him from his enemies.

And she said, “The Philistines are upon you, Samson!” And he awoke from his sleep and said, “I will go out as at other times and shake myself free.” But he did not know that the LORD had left him.Judges 16:20 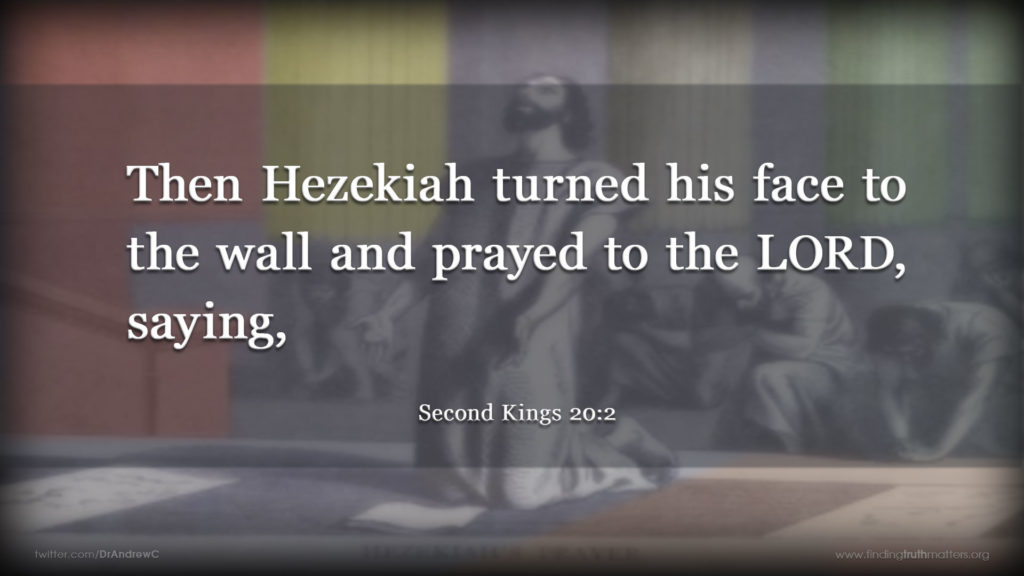 The Lord heard King Hezekiah’s prayer and once again sent the beloved prophet Isaiah to him. “Turn back, and say to Hezekiah the leader of my people, Thus says the LORD, the God of David your father: I have heard your prayer; I have seen your tears. Behold, I will heal you. On the third day you shall go up to the house of the LORD” (2Kings 20:5). 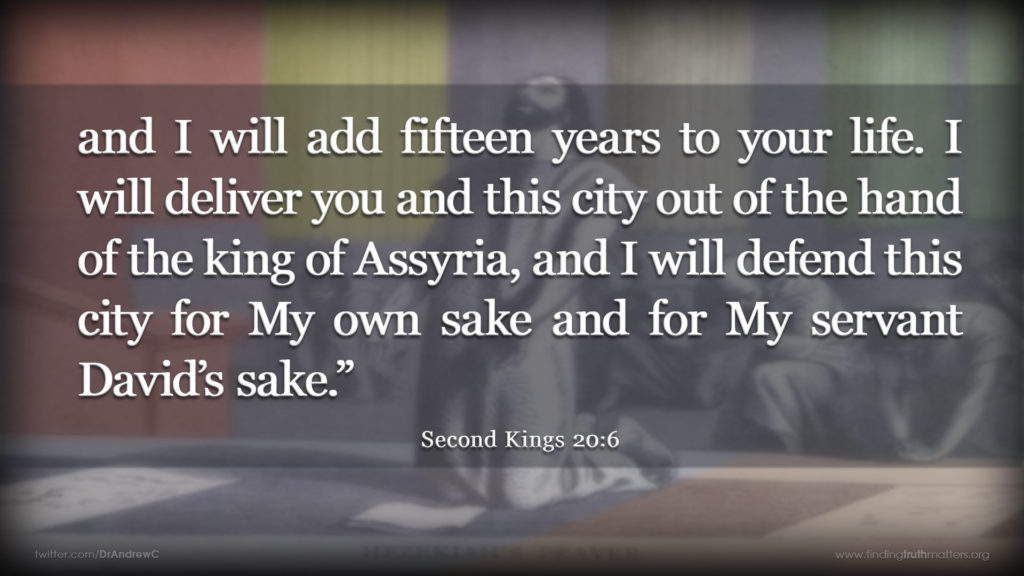 But Hezekiah did not make return according to the benefit done to him, for his heart was proud. Therefore wrath came upon him and Judah and Jerusalem.Second Chronicles 32:25 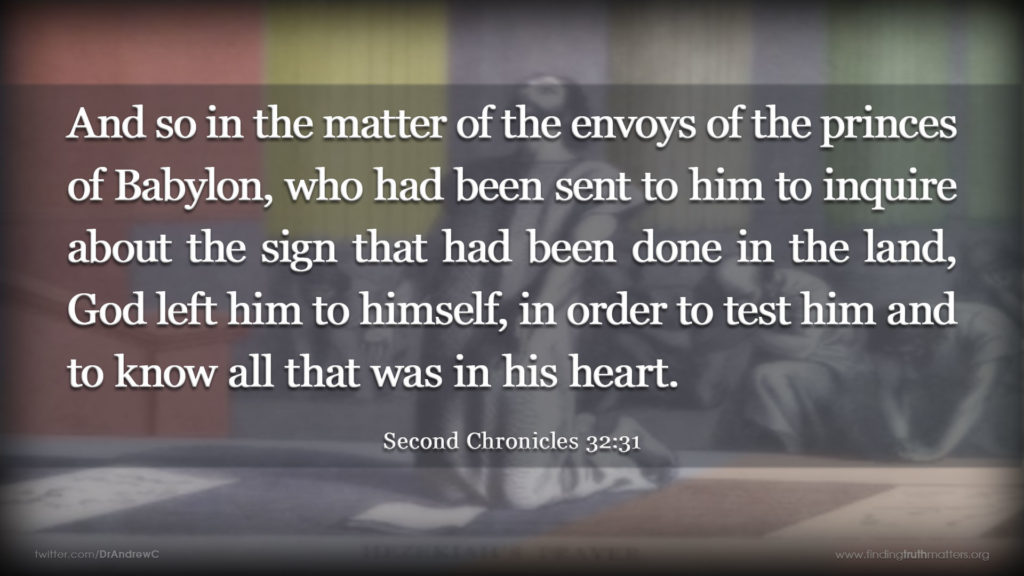 ¶ And Hezekiah had very great riches and honor, and he made for himself treasuries for silver, for gold, for precious stones, for spices, for shields, and for all kinds of costly vessels; storehouses also for the yield of grain, wine, and oil; and stalls for all kinds of cattle, and sheepfolds. He likewise provided cities for himself, and flocks and herds in abundance, for God had given him very great possessions. And so in the matter of the envoys of the princes of Babylon, who had been sent to him to inquire about the sign that had been done in the land, God left him to himself, in order to test him and to know all that was in his heart.Second Chronicles 32:27-31

NOT EVEN REPENTANCE UNDOES CONSEQUENCES

Repentance leads to forgiveness but it rarely undoes the resultant consequences of a person’s sin. The sins of Hezekiah’s last fifteen years had a disastrous impact on Judah. The tragic depths of his spiritual decline are seen in his boastful hospitality toward the Babylonian emissaries who visited him on behalf of their king to supposedly wish him a speedy recovery.  Rather than see the obvious threat this made to national security, King Hezekiah—in almost ‘Samsonesque’ arrogance—actually showed them the national and royal treasures, and where they could be found! 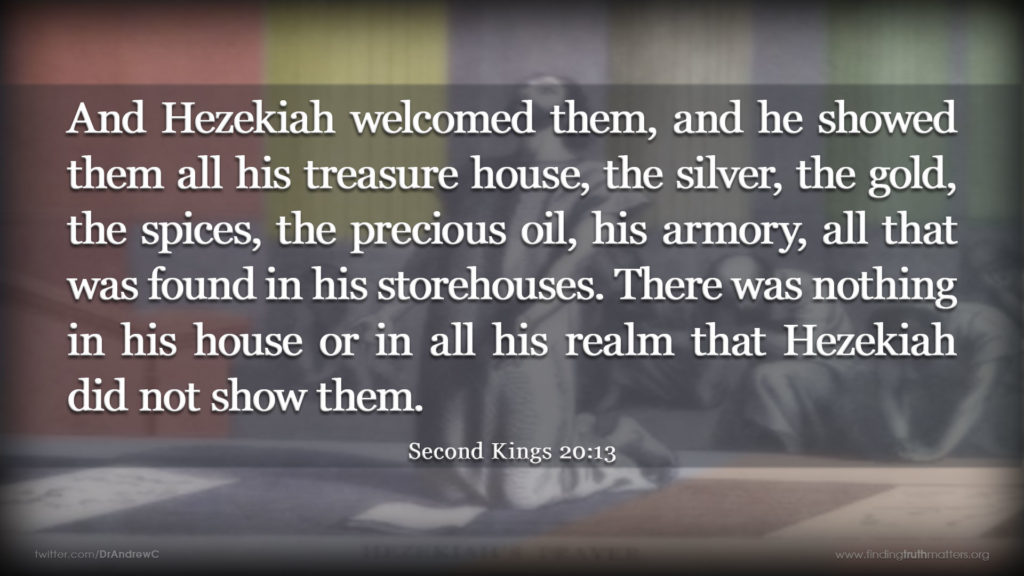 The damage that the final 15 years of King Hezekiah’s life and reign did to the destiny of Judah was staggering!

Then Isaiah the prophet came to King Hezekiah, and said to him, “What did these men say? And from where did they come to you?” And Hezekiah said, “They have come from a far country, from Babylon.” He said, “What have they seen in your house?” And Hezekiah answered, “They have seen all that is in my house; there is nothing in my storehouses that I did not show them.” ¶ Then Isaiah said to Hezekiah, “Hear the word of the LORD: Behold, the days are coming, when all that is in your house, and that which your fathers have stored up till this day, shall be carried to Babylon. Nothing shall be left, says the LORD. And some of your own sons, who will come from you, whom you will father, shall be taken away, and they shall be eunuchs in the palace of the king of Babylon.”Second Kings 20:14-18 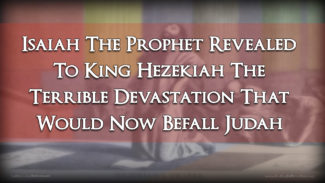 Bizarrely, when the prophet Isaiah revealed to King Hezekiah the damage that would unfold because of the King’s foolishness, Hezekiah responded, ““The word of the LORD that you have spoken is good.” For he thought, “Why not, if there will be peace and security in my days?”” His complete lack of concern for his unholy legacy and the destiny of his descendants is bewildering. When a child of God is indifferent to the consequences of their choices on successive generations, or when their lack of action in taking steps to prevent evil in society, it is a pathetic sight. (This is why we in Tasmania need every believer to care about the future of our State and why we need to take the necessary steps to withstand evil in our society —especially when it is smuggled into culture through the halls of Parliament!) 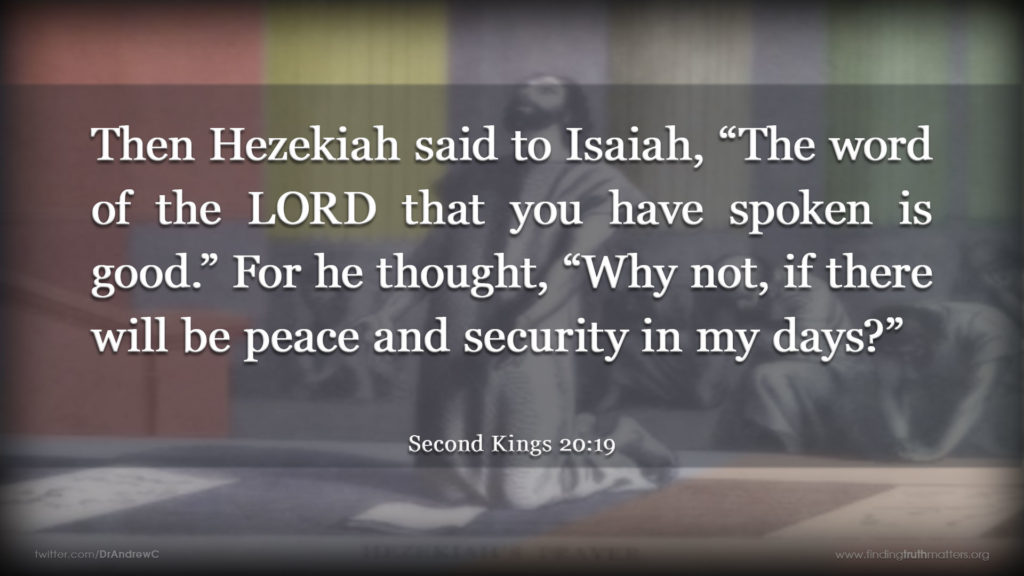 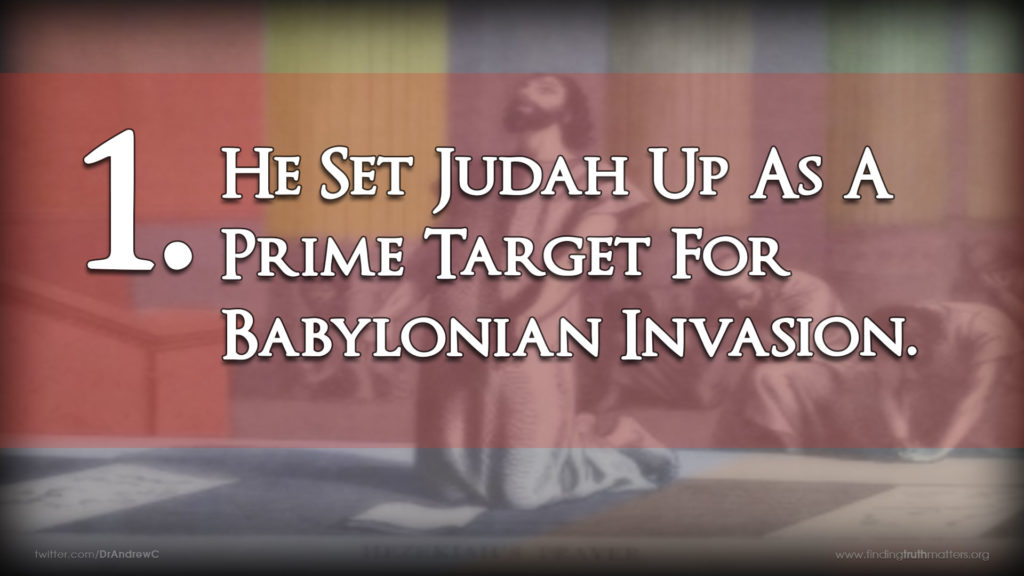 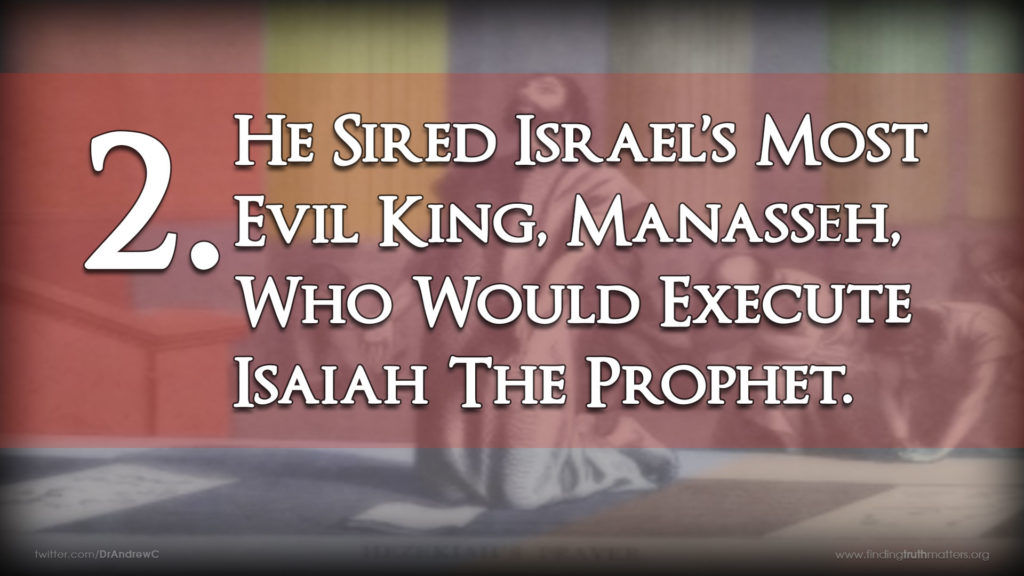 But they did not listen, and Manasseh led them astray to do more evil than the nations had done whom the LORD destroyed before the people of Israel. “Because Manasseh king of Judah has committed these abominations and has done things more evil than all that the Amorites did, who were before him, and has made Judah also to sin with his idols … ¶ Moreover, Manasseh shed very much innocent blood, till he had filled Jerusalem from one end to another, besides the sin that he made Judah to sin so that they did what was evil in the sight of the LORD.Second Kings 21:9, 11, 16 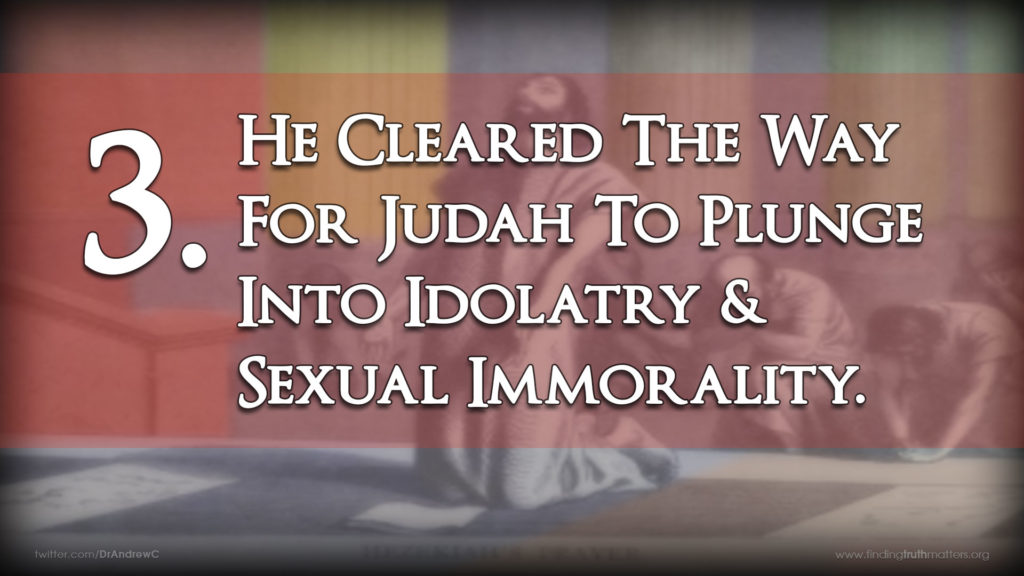 “Because Manasseh king of Judah has committed these abominations and has done things more evil than all that the Amorites did, who were before him, and has made Judah also to sin with his idols … He walked in all the way in which his father walked and served the idols that his father served and worshiped them.Second Kings 21:11, 21 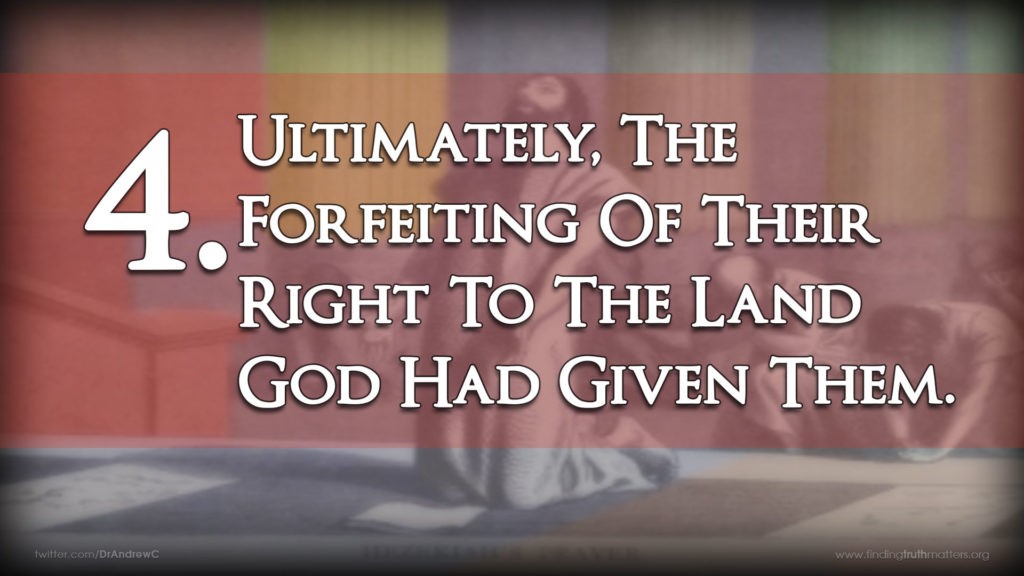 And he carried away Jehoiachin to Babylon. The king’s mother, the king’s wives, his officials, and the chief men of the land he took into captivity from Jerusalem to Babylon. And the king of Babylon brought captive to Babylon all the men of valor, 7,000, and the craftsmen and the metal workers, 1,000, all of them strong and fit for war. And the king of Babylon made Mattaniah, Jehoiachin’s uncle, king in his place, and changed his name to Zedekiah. For because of the anger of the LORD it came to the point in Jerusalem and Judah that he cast them out from his presence. ¶ And Zedekiah rebelled against the king of Babylon.Second Kings 24:15-17, 20 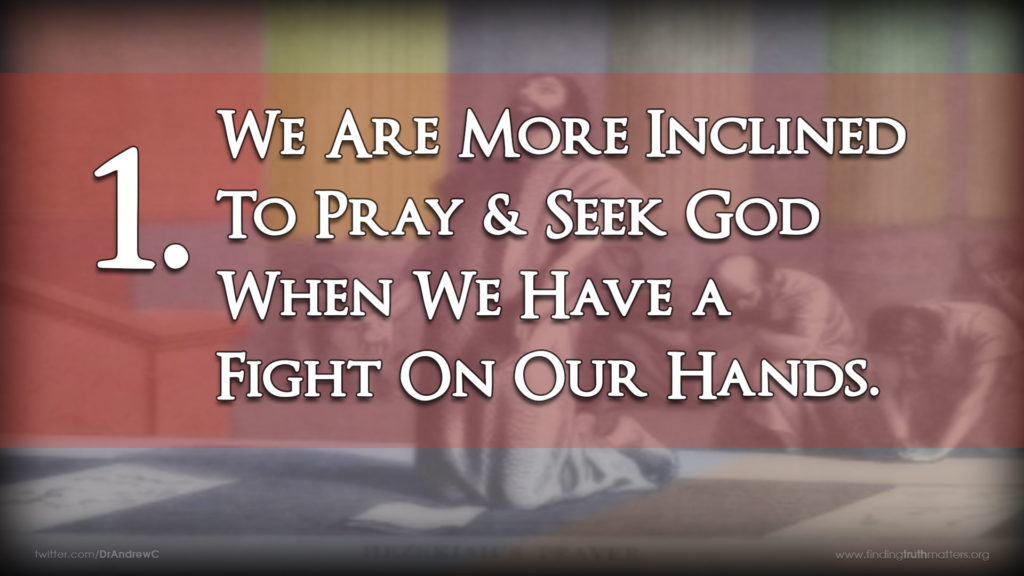 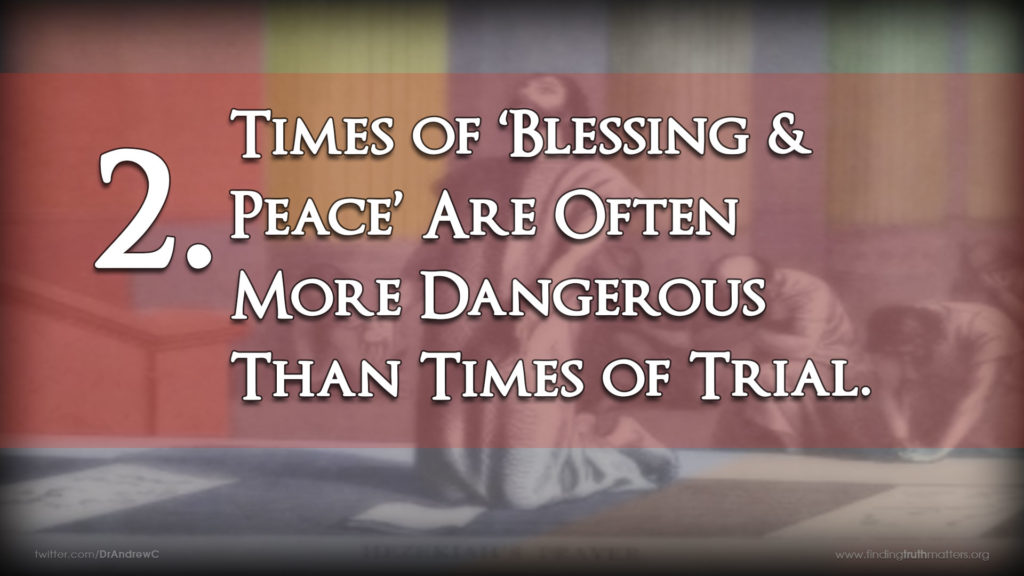 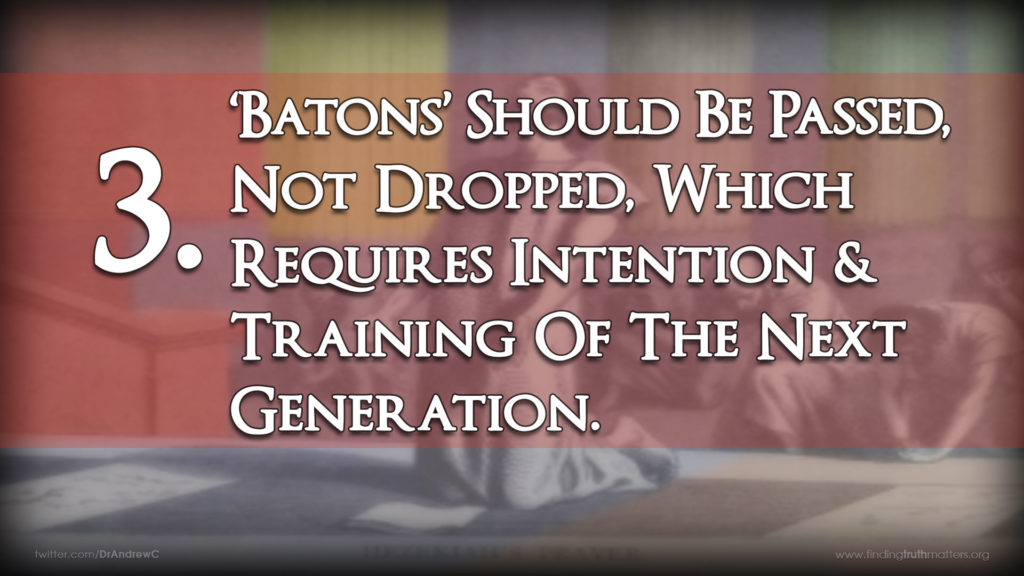 Posted by The weekly pastoral blog of Dr. Andrew Corbett at 17:54