NOT WELCOME AT OUR CHURCH! 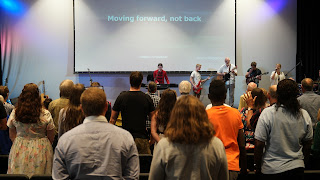 Who is welcome to church? We could glibly answer, “Everyone!” But we all know that’s not true. There is a group of people who will never be welcome to our church! This group consists of perfect people. Our church will never be for perfect people! We already have people who have done things they are ashamed of. We have former thieves in our church. We have former liars in our church. We have men who have betrayed their wives. We have wives who have betrayed their husbands. We have young people who have lost their innocence. We have business people who have cheated. We have formerly religious people who have perpetrated the most vile hypocrisies. Each of these people have found redemption after they were warmly welcomed to our church.
The kind of church Jesus described to His original disciples was made up of people who were either reluctant to come to church, or worst still, unaware of its existence. Yet when these reluctant souls did come in, Jesus foretold, they would find love, acceptance, and forgiveness.
But he said to him, “A man once gave a great banquet and invited many. And at the time for the banquet he sent his servant to say to those who had been invited, ‘Come, for everything is now ready.’
Luke 14:16-17 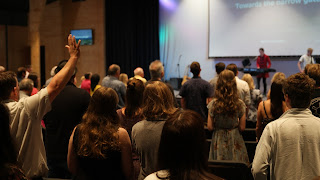 In this story, the Christ tells how those who might be described as ‘good’ or ‘nice’ were initially invited to the banquet. This is a picture of God the Father inviting people to His eternal heavenly banquet. But this lavishly generous invite met with an unappreciative response.
But they all alike began to make excuses. The first said to him, ‘I have bought a field, and I must go out and see it. Please have me excused.’ And another said, ‘I have bought five yoke of oxen, and I go to examine them. Please have me excused.’ And another said, ‘I have married a wife, and therefore I cannot come.’
Luke 14:18-20
These were the invited guests who thought that the banquet was about food. The best banquets are never just about the food on offer. We see this same confusion today with those who think that the Father’s invite is an invitation to become religious. God does not invite people to become religious – He freely invites people to become to His heirs! C.S. Lewis once described this invite as being like someone who is offered a holiday at a beautiful beachside resort and upon arriving there they find the nearest mud puddle to plonk themselves down in and begin playing with the mud for the remainder of their holiday time, when just a few yards past the obscuring fence, is a beautiful beach to enjoy! The Father’s offer to enjoy eternal satisfaction is often rejected by those who think that nothing could be better than the mud-puddle they are sitting in presently!
The Host of the banquet then turns his attention to those who do not deserve his favour and instructs his servants to invite a different kind of people-
So the servant came and reported these things to his master. Then the master of the house became angry and said to his servant, ‘Go out quickly to the streets and lanes of the city, and bring in the poor and crippled and blind and lame.’ And the servant said, ‘Sir, what you commanded has been done, and still there is room.’ And the master said to the servant, ‘Go out to the highways and hedges and compel people to come in, that my house may be filled. For I tell you, none of those men who were invited shall taste my banquet.’”
Luke 14:21-24

JESUS DESCRIBED HIS CHURCH AS ONCE ‘BLIND & CRIPPLED’

The poor, the crippled, the blind and the lame accepted the banquet invitation with gratitude. None of these people had to be convinced of their woeful condition. It takes humility to acknowledge when we are poor, crippled, blind or lame. The guests to this sumptuous banquet discovered not only delectable food, but that their host had the power to cancel their debts, open their eyes, restore their withered limbs, and enable them to enjoy a dignity they had previously had no hope of. As outstanding as all this was, their Host was to do something else for them that far outweighed these acts of grace. Each one of these unloved orphans was made a member of His family and given the full rights and privileges of now being made a member of the royal family!
Each Sunday as we gather, we are ‘shadow banqueting’. Our church service faintly reflects the Royal Heavenly Banquet which awaits us. We have each received with gladness the offer to come to that Banquet. Thus, each Sunday, we hobble, limp, and stumble along to the shadow-banquet. Our church is not comprised of perfect people. And neither was the early church. The apostle Paul described the church at Corinth, in Greece, as being comprised of formerly –  ‘sexually immoral, idolaters, adulterers, men who practice homosexuality, thieves, the greedy, drunkards, revilers, swindlers’ (1Cor. 6:9-10). He then reminds them of their adoption into God’s Royal family and their new identities-
And such were some of you. But you were washed, you were sanctified, you were justified in the name of the Lord Jesus Christ and by the Spirit of our God.
First Corinthians 6:11
Who is welcome to come to our church? Imperfect, flawed, broken, hurting, lost, lonely, confused, people – that’s who! Help me this Sunday to extend a welcome to people who don’t know any better than playing in life’s mud puddles. As this welcome sign in the entrance of Coventry Cathedral states, these people may look like they have it all together, or they may look like their life has fallen apart. It doesn’t matter. As the servant reported back to the banquet host, “There is still room for more!“

Pastor Andrew
Posted by The weekly pastoral blog of Dr. Andrew Corbett at 09:57