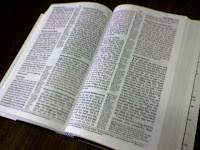 I was recently asked to evaluate a teaching by a very popular 'Bible teacher' ("S.W.") who claimed that his insights were grounded in 'the original Rabbinic teachings'. This is a list of concerns which I quickly came up with -

1. We should always be concerned when someone teaches something that has never been taught before.

2. We should be on guard whenever a "Bible" teacher says that Christianity is "too concerned with being 'right'".

3. We should be very cautious when a "Bible" teacher makes a claim such as, "this is all through the Bible" but fails to give even one supporting Biblical citation. In one instance SW made this claim about Hebrew women having to bathe for three days before they got married. He said that this is all through the Bible, then cited Esther being prepared for an Assyrian wedding (not a Hebrew wedding!) as his proof text.

4. We should be discerning about Biblical examples given to make a claim. In one instance, SW states that a man who failed to live up to his marriage covenant would be physically beaten by his father in-law, and he then cited the bride in the Song of Solomon being beaten by the town elders. This is a preposterous interpretation of the Song of Solomon text, and attempts to endorse the mis-treatment of women. I find no Biblical support for this claim irregardless of the poor use of a Biblical example.

5. We should be careful when someone says that a covenant was little more than a contract.

6. We should be very careful when someone attempts to read New Testament teaching into Old Testament stories. For example, SW completely misses the point of Pentecost when he says that it was the one festival which required leavened bread to be used and leaven means "sin". He goes on to say that the priest was to pour oil over the leavened bread which means that Pentecost was a picture of the Holy Spirit being poured out on sinful flesh. But this is not the point of Pentecost. Leaven represented "Gentiles" and the priest waving the two loaves represented the union of Jew and Gentile under the New Covenant. This is a point that the Epistle to the Ephesians makes.

7. We should be concerned when any "Bible" teacher justifies New Covenant action on the rules of Jews and Hebrews. Just because it became a part of Hebrew culture for divorce to be granted for nearly any reason does not mitigate the point of the marriage covenant that it was meant to be for life. This is surely the point that Christ makes in Matthew 19:6. SW asserts that a Hebrew wife could initiate divorce on the grounds of her husband's "slothfulness". Unless a Biblical proof text can be supplied to the contrary, this statement seems to be grounded in fantasy rather than Biblical or even historical fact.


I trust that the principles cited above will help you to be more discerning about what teaching you allow to shape your life and how it affects your devotion to Christ.

Posted by The weekly pastoral blog of Dr. Andrew Corbett at 22:31