What Your Kitchen Sink Says About You

There is an ancient art used by the most sophisticated analysts of human behaviour that is not well known among the general public. You may have heard of "Divination" which is used by occultic practitioners to make proclamations. I am not advocating for this kind of witchery. However, the ancient art of discerning of which I am writing, is no less revealing in its pronouncements - indeed it is considered by those who know to be far more reliable. 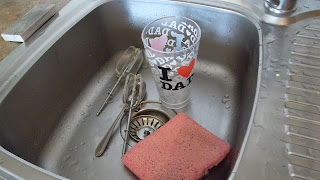 Not Divination but Sinkination. Divination and Sinkination do have one thing in common though: they both use tea cups. The wizard-diviner uses the tea-leaves at the bottom of a enquirer's tea cup to 'divine', whereas the Sinkinater uses the whole cup (although, unlike the Diviner, the Sinkinator is not restricted to tea-cups though because they find coffee cups, mugs, and empty glasses of water just as useful).  The Sinkinater is able to form an amazingly accurate picture of a person without ever having met that person merely by examining their kitchen sink (it is not even necessary for the sink to be in their own home, it works equally well with work-place, or any, sink also). 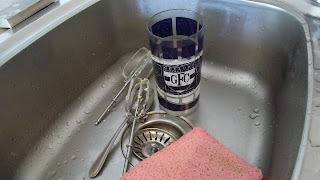 What the trained Sinkinater is able to ascertain is uncanny. They can learn the most insightful things about their subject. It is believed, by those who know, that Sherlock Holmes was the first to develop this art. His manuscript was published under the pseudonym, Sir Kelvin Ater Caroma. MI-6 incorporated his research into its Agent Training program and the observant will readily recall that the second most famous MI-6 agent, Agent 007, was a deft Sinkinater in his pursuit of bad guys (take a close look at James in any of his movies and notice the subtle but deliberate fleeting glare he gives in the direction of a kitchen or bar sink). Many a villian to the Mother Country was unwittingly brought down ultimately by Bond's little known Sinkinater skills. 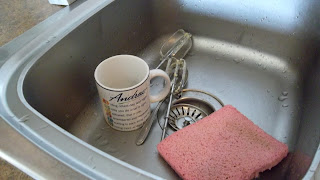 One of the immediate things that a trained and qualified Sinkinater can ascertain about a person is how they handle pressure. It's a little complicated to the uninitiated, and space prevents me from divulging all of the procedures that lead to these inerrant conclusions about a subject, but it goes something like this. If a subject drinks from their cup/mug/glass and places the said item into the sink to either be washed up by another, or to be washed by themselves at a later time, the Sinkinater can quickly employ their skills to analyse how the subject handles pressure. Drawing on ancient Egyptian wisdom which was also known during the times of the Babylonians and the Dynastic Chinese, the Sinkinater seeks to learn whether a person is someone who deals with things:


(i) themselves, when it is in their power to do so, or whether they expect others to their work for them;

(ii) immediately, or whether they procrastinate and let little things like cups/mugs/glasses build up to be a sink full of such items.

From our Primary and Elementary School days we well remember the Great Controversy of 1876 when the London Academy of Sciences was split down the middle over Sir Kelvin Ater Coroma's findings into Sinkology. This ugly and undignified scrap almost brought down the House of Lords, until Sherlock Holmes himself wrote to the London Times validating the findings of Sir Coroma. Those who had scoffed at the idea that people who left cups/mugs/glasses in their sinks were slightly irresponsible procrastinators were now publicly humiliated and removed from their position of public notoriety. The connection between those who treated the trivial mundane matters of life with the important consequential matters had now become undeniable. 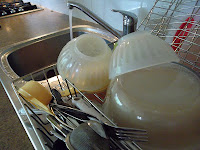 In much the same way that Astrologers loosely base their craft-iness on the work of credible Astronomers, Leadership Experts soon realised the phenomenal benefits that Sinkology could deliver to their leadership clients. Leadership Experts, such as John Maxwell, Zig Ziglar, Bill Hybels, all now teach their clients (many who pay big money to attend their Seminars) to wash their cups/mugs/glasses up immediately - and don't just dump them in the sink! In the old days, they used to teach interpersonal skills, management techniques, vision-casting, goal setting, strategy implementation, to these CEOs - but with the discovery of Sinkology, they can now achieve all that and much more by simply training these leadership elites to wash up their cups immediately. We haven't got time here, and copyright restrictions prevent me from giving too much of the substance of these Seminars away for free, but I can say that these Leadership Trainers show the clear link between how a person handles the little things when there is no pressure with how they will handle the bigger things of life when there is pressure. One skeptical CEO said two weeks after attending one of these high-priced Seminars-


"I was very skeptical at first. In fact, I was a little outraged that I had taken 3 days out of my schedule and paid $23,000 to attend this training Seminar, and all he talked about was how I treated my coffee cup! I was outraged that he suggested he could tell how I generally handled pressure by looking at my sink! He didn't know the time pressures I am under. I haven't got time to wash up my cup! I was about to demand my money back when I said to myself- 'Self, why don't you try it first?' So I did. And I have to say that I'm now a believer. I've been washing up after myself straight away and it's changed the way I see other little time demands. I now reply quickly and immediately to emails. I now keep an up-to-date To Do List and constantly check off completed tasks. I view interruptions from people as mysterious opportunities. This sinkology stuff really works. Try it for yourself! I'll definitely be doing the $46,000 Teaspoon Leadership Seminar next month!"

How we treat the little things in times of relative ease says a lot about us but it also shapes us for how we handle times of pressure in life, at work, in the home. In Romans 5, there is a "Pressure Progression" that ultimately reveals that it is pressure which exposes who we really are.

Jer. 12:5 ¶ “If you have raced with men on foot, and they have wearied you, how will you compete with horses? And if in a safe land you are so trusting, what will you do in the thicket of the Jordan?

If you want to handle pressure better, don't let little things build up. Deal with those things, within your power to do so, immediately. This new lifestyle may seemingly slow you down, after all, taking an extra 37.5 seconds to wash your cup up does slow you down. But looking at a sink piled with cups, plates, cutlery, and feeling overwhelmed may slow you down more.

Spiritually, the time-proven lessons from Sinkology can be readily applied to taking up our Bibles each day and reading them. Sure, starting your day with a little Bible reading can seem like a slow way to start your day. But when confronted with a pile of problems of varying magnitudes in which you desperately need to hear from God, changing your lifestyle to get still enough to hear from God's Word my also seem overwhelming. Sinkinaters have a lot to teach us about the correlation between how we view and treat the "little" things in life, like cups and children, with the apparent weightier things of life. Perhaps though, the problem for the pressured Christian is that what has become regarded as "little" things to be done later, were never really little things and certainly should never have been for later.