Who Does God Think He Is?

I’m fascinated with Roman history. Understanding this period helps me to understand both how the Western world has been shaped and what the conditions were like for the birth and expansion of Christianity. Nearly every Emperor of Rome demanded god-like devotion. “Kaiser Ho Kurios!” (Caesar is Lord!) was a statement of Emperor devotion demanded from the citizens and non-citizens at the time. Non-compliance could have resulted in swift execution. Roman Emperors were not the only ones to self-deify themselves. In the Book of Daniel we read that Nebuchadnezzar then Darius did the same. Of course the Romans believed in a Pantheon of gods – Zeus, Hermes, Mars, Jupiter, Hercules, and so on (note Acts 14:12-13

). Not surprisingly, most the Caesars who self-deified themselves were either assassinated by someone close to them, or (as in the case of Nero) invited to commit suicide. Apparently claiming to be a god, when you are not, tends to infuriate those around you. Which is why Jesus stands out as unique among those who claimed to be God. His crucifixion reveals that He certainly infuriated some who did not know Him, but among those who did know Him, their response to His claim to Deity was worship and devotion – even from His brothers! So just who does God think He is?
To you it was shown, that you might know that the LORD is God; there is no other besides him.
Deuteronomy 4:35

¶ Therefore, as to the eating of food offered to idols, we know that “an idol has no real existence,” and that “there is no God but one.”
First Corinthians 8:4 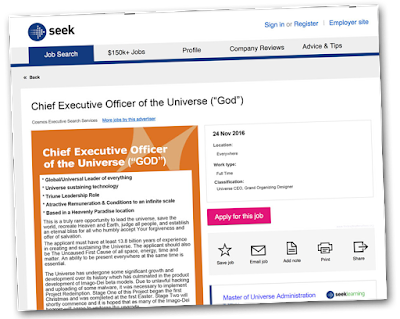 If, for some impossible reason, the position for “God” became vacant, what might the job description look like? Being a Judge would definitely be listed. Judging is a god-like activity, and the God of the Universe would have to be the Ultimate Judge of that Universe.
In sustaining the Universe and the required justice that this involves, it can be seen from the Bible that God appoints some human beings to serve as His deputies – as judges. This is why the Psalmist could say-
¶ God has taken his place in the divine council; in the midst of the gods he holds judgment:
Psalm 82:1

We note that the Psalmist contrasts god-like deputies with God, for, unlike God, these human deputies who perform a God-like function (judging) will themselves be judged and eventually die. Jesus cited this passage in John 10:34

. His point is similar, sometimes human beings deputise for God and identified as fulfilling the God-role of ‘judge’, but His claim to deity goes further because He claimed that He would not be subject to the finality of death like mere mortals.
God is the only person truly qualified to perfectly judge each person. Each one of us will stand before this perfect Judge and give an account of our lives.
¶ Then I saw a great white throne and him who was seated on it. From His presence earth and sky fled away, and no place was found for them.  And I saw the dead, great and small, standing before the throne, and books were opened. Then another book was opened, which is the book of life. And the dead were judged by what was written in the books, according to what they had done.
Revelation 20:11-12

God’s authority to judge is grounded in His claim to be Creator. Since this world is His, He alone has the right to decree how people should conduct themselves.
.

The Bible also refers to those who serve God as being His “sons”. In this light, many scholars believe that the ‘sons of God’ referred to in Genesis 6:2-4

is describing fallen angels who were created to serve God. While angels do not ordinarily have corporeal (physical) bodies like humans, the Scriptures leave room for the possibility that it is at least possible for an angel to take on a human form and carry out human functions such as eating and therefore (possibly) sexual activity (note Hebrews 13:2

). This might explain why the offspring of this activity mentioned in Genesis 6 were born as giants.
The designation of ‘sons of God’ is to be distinguished from the Son of God. Even under the Old Covenant period there was a growing knowledge that God had a Son (Proverbs 30:4

) and by the time of the New Covenant this revelation is stated clearly in John 3:16

when it describes Him as God’s only Son. It was during the proceedings of the Nicene Church Council around 325AD when Athanasius identified Christ as the eternal (no beginning, no end) Son of God, since God the Father is described as the Eternal Father (did not begin to be a Father and will never cease being a Father). Thus, since God is the Eternal Father, He must have always had an Eternal Son. Therefore, the Council reasoned, Jesus is the Co-Eternal, Co-Equal, Co-Immutable, Son of God.
The New Testament reveals that God adopts each one who turns to Him for salvation. Jesus described the love of His Father in the story of the Prodigal Son. The father not only forgives the humble seeker of his forgiveness, he celebrates his return and declares him to be his son with full inheritance rights!
even as he chose us in him before the foundation of the world, that we should be holy and blameless before him. In love He predestined us for adoption to himself as sons through Jesus Christ, according to the purpose of his will,
Ephesians 1:4-5

Who does God think He is? He declares Himself to be Creator, the Law-giver, Judge, Father, and Saviour. He has founded the Church as His agency for declaring to the world who He is, what His will is, to warn them of His certain judgment, to invite them to return to Him as their Father and Saviour. For those who have the eyes of their hearts opened to this amazing grace, their hearts begin to crave His holiness and their lives begin to reflect His godliness.
We love because He first loved us.
First John 4:19

Amen.
Posted by The weekly pastoral blog of Dr. Andrew Corbett at 14:21