If The Foundations Are Destroyed

"If the foundations are destroyed," the Royal Psalmist wrote, "what can the righteous do?" Foundations are rather integral not just for buildings, but for people, families, churches and societies. But it sounds like the Kingly minstrel regarded the "righteous" as integral to a society's foundations. 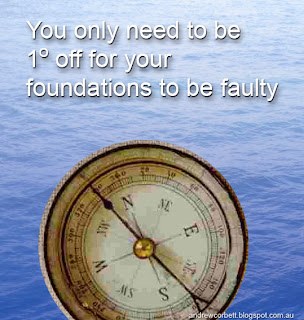 King David wrote this in Psalm 11:3. But in keeping with the principle of context, we get a clue about what he was intending when we read the preceding two verses. In verse 1, David refers to God as his refuge and he describes the urge he battles with to be like a bird that flies away to the top of a mountain. I'm sure that David is not alone in wanting God to be their "refuge" or "hiding place" in times of intense pressure. The idea of being able to "fly away" is probably a very tempting option for those who are struggling to cope with strained relationships and the pressures of life. This is how David was feeling. The next verse gives the reader a clue as to why he was feeling this way.

In verse 2, David describes his present state. The wicked shoot arrows at the upright in the dark. It's hard to see arrows coming at you when they are fired in the dark! David was feeling like he was under attack by people he identified as "enemies". Spiritually, our Enemy also fires at us "in the dark". Sometimes the attacks of the Enemy are so intense that we too wish we could just fly away like a bird. But if the upright, those who know God as "LORD", should flee from the heat of the battle, then verse 3 results: the foundations are destroyed.

WHAT SHOULD OUR FOUNDATIONS BE

The Enemy attacks the upright with very little regard to any rules of fair-play. The Enemy seeks to wear down the godly (note Daniel 7:25). His constant attack against the foundations which underpin successful people, families, churches, and societies, require those who love the truth to take a stand for the truth.

In his book, MUD, SWEAT, AND TEARS, Bear Grylls describes the process he went through to enter the British SAS (elite forces). One hundred and eighty men applied. Four men, including BG, made it through the program. After Bear completed the SAS training, he tells of the moment that changed his life when a mysterious high ranking SAS veteran entered the room and spoke briefly with the four new SAS soldiers. The one statement that gripped BG was: You mean are extraordinary! And there is only one thing that separates the ordinary from the extraordinary, and that's the little word extra! You will find yourself getting to the point when everything in you wants to quit - but you won't! You have within you the capacity to do extra - more than what is expected!"

Spiritually, followers of Christ now have the capacity to do the extraordinary! Even though the heat of battle attempts to wears us down, God enables us to take a stand and to contribute to the maintaining of the foundations that secure the welfare of people, families, churches and society. We need more Christians to understand that they should be on "a war footing". In the Australian movie, TOMORROW, WHEN THE WAR BEGAN, we are introduced to group of ordinary Aussie teenagers who see life as a licence to have fun but are then thrust into a sudden war where their families have either been killed or imprisoned. The transformation of Homer from an irresponsible clown into a mature responsible soldier is breath-taking. But how many people realise that we are already in a war, a spiritual war which seeks to undermine our foundations.

David goes on to describe the foundations he is referring to. In verse 4, he tells us something about God, the LORD - He is enthroned in Heaven. God rules. He is Sovereign. God is in control. His eyes test all people. This is God, the truth of His Word, and accountability to the truth - the foundations that the Enemy continually seeks to destroy and what the righteous must continually defend.

Posted by The weekly pastoral blog of Dr. Andrew Corbett at 22:36