Recently a major denomination in the USA held their national conference to discuss their position on whether to ordain as ministers those who were openly practising sexual immorality. By a vote of 52% the Conference rejected the motion*. But even more disturbing were some of reasons given for even having the vote in the first place. Speaker after speaker spoke of being torn and uncertain of what to do. Some speakers prayerfully appealed to God for wisdom in this 'time of crisis'.


Bewilderingly, none of the speakers to the motion made reference to the Bible. If they had, there would have been no confusion. There would have been no 'crisis' or 'turmoil' or 'uncertainty'. God's Word is remarkably clear in dealing with this matter. Yet, somehow, people at this Conference thought that the opinions of others who disagreed with the Bible was equally authoritative as the Bible. I guess that many of these people had been devilishly lulled into the lie that the Bible's clear statements on morality were "out-dated" "unenlightened" "belonging to an uninformed by-gone era ignorant of the scientific facts".

Every scripture is inspired by God and useful for teaching, for reproof, for correction, and for training in righteousness, that the person dedicated to God may be capable and equipped for every good work.
2Tim 3:16-17

¶ My soul clings to the dust;
give me life according to your word!.Psalm 119:25

Whenever a church or a denomination falls prey to the Enemy's schemes to deviate from the Bible as its source of God's mind, it is poisoning itself. This is why we are not guided by corporate management techniques, consumer-sentiment surveys, or worldly strategic planning methods. It is also why individual believers are not to be shaped primarily by the opinions of would-be spiritual guides who speak of finding yourself or discovering your inner light. Their paperback books sell by the millions. Their TV shows regular feature major celebrities endorsing their devilish philosophies. Denominations, churches, individual believers - all stand or fall spiritually on whether they are guided by the Word of God or the opinions of men.

¶ But Jesus answered them, "You are wrong, because you know neither the Scriptures nor the power of God.
Matthew 22:29

One of the most influential theologians of the 20th century, Prof. Karl Barth, was asked near the end of his career what the greatest theological truth he had learned was. He said, "Jesus loves me. This I know. For the Bible tells me so." 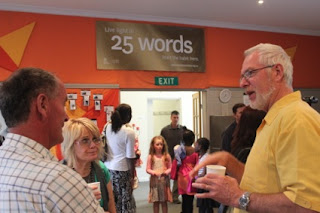 Utterly profound! Not because it was the conjured idea of a great theologian. Not because it's a nice sentiment. Profound because it answers the most profound "what" and the most profound "how" about truth. What is the truth? Jesus loves you. Don't gloss over that statement as if it was a cliche, a slogan, a motto, or just piece of jargon! It is the most profound truth ever revealed. But that's the point -it's revealed truth. How do we know that it's the truth? This is why Karl Barth's statement is phenomenally profound since it not only reveals the what of truth but the how we know it is the truth. It's not merely that we can experience the love of Jesus ("This I know."), although verifiability is one of the important tests of truth, it's that we can be sure of this because - the Bible tells me so.

Acts 17:2 And Paul went in, as was his custom, and on three Sabbath days he reasoned with them from the Scriptures

Around 1517, a German Monk, Martin Luther had been reading the Bible (something not common among monks and priests of his day), and found that the Roman Catholic Church had departed dramatically from what the Bible taught. He posted 95 points of objection to what the church was teaching compared to Scripture. He was then ordered to apologise to the Pope for this. He refused to do so because he valued the Bible more than the opnions of men! And thus, the Protestant Reformation began. How many today can recognise when a teaching or practice by a church or Christian leader is not Biblical? How many today are even troubled by it?

What we know is that God loves us through Jesus so much that He sent Him to die for us so that we could live forever beyond the grave in the perfect peace and ultimate joy in heaven. How we know this is because it is written by God Himself through the instruments of men in the Bible. Rest assured, the Enemy who hates God thinks that he can undermine the glory of God by attacking the authority of the Word of God. When you read your Bible it is not merely an exercise in literature transaction. Rather, it is a powerful means of God's grace that infuses your soul with refreshing spiritual strength that empowers you to withstand adversity, and cleanses your mind with revitalising inspiration. This is why at Legana we ground everything we believe in God's Word. It's why we draw our insight and wisdom for life's difficulties from the Bible, rather than the techniques of men - no matter how "spiritual" it sounds. If more denominations, churches, and individual believers understand the true "what" better, our purpose as a denomination, church or believer would be much clearer to us. But this can only happen if we delve into the "how" - the Word of God.

Posted by The weekly pastoral blog of Dr. Andrew Corbett at 14:14