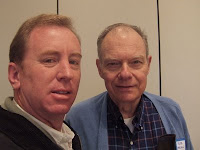 I'm writing from the United States. When I was Australia we were aware of the looming economic crisis. But here, it seems that everytime I look at a newspaper, hear a radio station or turn on the TV, it is not a looming economic crisis for Americans. On my first preaching appointment, a man shared how his bank was trying to foreclose on his mortgage. He shared that he was several payments behind in his mortgage because he lost his job and the Bank had demanded immediate payment or else they would sell the house from under him. As I attended a pastors conference in Virginia, over and over pastors shared how the economic crisis was affecting people in their churches.

To help curb and perhaps correct the economic crisis, President Obama announced yesterday that he was going to cap the salaries of CEOs and other Executives of Finance Providers (Banks, Lenders, Mortgage Companies) to $500,000 a year. This has sparked an outcry here. Some of these CEOs and Finance Company Executives are on annual salaries of $20,000,000 plus bonuses! Many of these same Executives received company bonuses of millions of dollars while their companies literally lost billions! It seems that more and more Americans are realising why they are in an economic crisis when their business leaders have glorified hyper-avarice!

American Christian Media Guru, Phil Cooke, notes that many of these executives who have been layed-off from their Wall Street jobs are now looking to enter into Christian ministry and finding it a huge shock-

2) Non-profits don’t have the cushy perks businesses have. We turn our own lights off, our benefit plans are smaller, and most important - our resources aren’t as big. I know one manager who was so used to having a huge staff, that when he transitioned to a non-profit he quit within a month. He actually had to get his own coffee and open his own mail. Shocked, he couldn’t handle it...4) We work long hours too. But we don’t have the incentive of bonus pay (even overtime), or a car service to take us home after hours.


What lessons can we learn from what's happening in America? How can we as a church minister to people who will be "victims" of this economic crisis?

1. Model what Jesus taught in Luke 12:15(And he said to them, “Take care, and be on your guard against all covetousness, for one’s life does not consist in the abundance of his possessions.”)

2. Demonstrate that we regard our relationship with Christ and His church as our source of significance
(Romans 15:7)
3. Avoid debt for unnecessaries and build reserves
(Romans 13:8)


As a church, I hope we can model these 5 points corporately (together) and individually (as individuals and families). We are greatly blessed as a church in that we have worked hard to ensure that we do not have any debt and that we are about to commence a major building program hopefully without debt, and yet we are seeking to advance the Cause of Christ by taking some big steps of faith this year. And in all that we have done and will seek to do, it is our intention that we demonstrate that we aren't placing inappropriate value in stuff, but rather we are placing higher value on the "things" that really matter.

Luke 9:25 For what does it profit a man if he gains the whole world and loses or forfeits himself?

Amen
Posted by The weekly pastoral blog of Dr. Andrew Corbett at 04:51