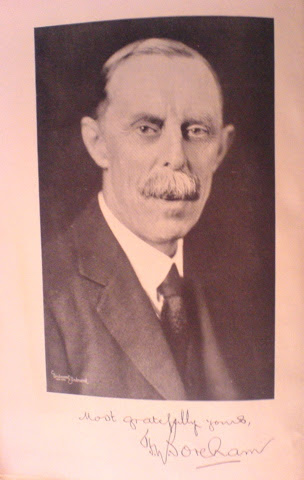 In F.W. Boreham's all-time classic collection of essays- Mushrooms On The Moor, he has an excellent piece on the place of handicaps. He notes that champions relish handicaps while the mediocre are daunted by them. He describes watching a handicap foot race where the champion was severely handicapped. Boreham thought this was most unjust. As he viewed the race's finish he saw that despite the champion being the last to start the race he had chased down the field to end up winning the race. The great pastor went over to the great runner to investigate whether they shared a sense of injustice about this handicapping.

Boreham was mildly surprised at the champion's response. Far from being daunted by the handicap the champion actually relished the opportunity to compete both with the field of competitors and himself. Himself? Boreham was intrigued. The champion explained that it was only when he truly felt challenged to go beyond where he had previously been that he could be satisfied that he had given his best.

It was some time after this when Boreham attended a Missions Conference where the speaker appealed to his audience to give like they'd never given before so that the Gospel could be taken to the four corners of the world. This speaker shared how he had as a young man longed to go himself to the Missions field but was denied by his denominational leaders due to his physical short-comings. This was a major setback for this aspiring missionary. He was somewhat handicapped physically. But he was not daunted by his handicap. He applied his mind to understand commerce and business. In this arena he proved himself a champion. As a result, he told the Conference, he was able to do more for missions by enabling more missionaries to serve than he could if he had gone himself. He had dealt with his handicap like a champion!

But then Boreham laments that in his church experience up until 1915, he had found too few men within the church with a champion spirit. Instead, he had found too many men who were too easily daunted by even the slightest handicap. They were too busy to serve, too financially committed to give, too nervous to lead or too tired to share. What the church needs, sighs the great pastor, is men with a champion spirit.

I have just finished reading the autobiography of Peter J. Daniels. It's hard not to imagine that what F.W. Boreham lamented around 1915 would have delighted him around 1985 if he had someone like Peter Daniels in his church. Mr Daniels, who I have invited to Launceston in November this year, at one point served on several international MIssions boards based in Singapore and L.A., and several Australian Missions Boards (including Youth For Christ) while he ran several business enterprises. At this point in his life, Mr Daniels says he was "stretched". Now in his late 70s, he is still going strong. He serves the Lord with a passion. He speaks in more churches across Australia and the USA than any other speaker on the planet. He gives more to the work of missions than perhaps anyone in history. But perhaps most impressively, is positioning his life for maximum impact for hundreds of years after his life on earth expires. Mr Boreham might well describe Mr Daniels as a man who was never daunted by his handicaps, but like any other champion learned to overcome them.

May God give us more such champions within the church.