Life's Growth Moments Are Often Unrecognisable At The Time

It’s how we handle the little moments which prepare us for the big ones. And it’s the littlemoments which tend to shape us more profoundly – for better or for worse. Being shaped for better by life’s moments means that we become more confident about dealing with life’s difficulties. It means we become more resilient to life’s setbacks. It means that we are less wasteful and therefore able to build more reserves in life consisting of finances, strength, time, and knowledge. Conversely, when life’s moments are allowed to shape us into someone worse, we become prickly, withdrawn, hard to get along with, discontent, and always in need. Perhaps if we could only recognise these little moments for what they are, we might respond to them quite differently.

Life’s most profound moments occur when it presents us with opportunities. How many times have you been presented with an opportunity to do something you have never done before and you nearly said, “No.”? Perhaps, even reluctantly, you said “Yes” and then afterwards you were sooo glad that you did! This might have been to go on a journey somewhere, see a movie with friends, try a new cafe or restaurant. These kind of opportunity moments shape us either into open people, or closed people. Once I was asked if I would go to a professional development seminar in the place of someone who had booked in but could no longer go. I didn’t want to. I was more than reluctant. But I said “Yes.” That one day professional development seminar changed my life. I had another moment about 30 years ago when an academic mentor of mine, Richard Winter, asked me if I would like to get involved in a student group at Deakin University in Geelong, called, Overseas Christian Fellowship. Despite my reluctance, I said “Yes” and the ultimate result of that “Yes” was that I met a young lady by the name of Kim (who became my wife).
Sometimes God presents us with opportunities by showing us a need. By saying “Yes” with our willingness to meet that need, we are being shaped into better, bigger, stronger, more admirable people.
¶ “ ‘I know your works. Behold, I have set before you an open door, which no one is able to shut. I know that you have but little power, and yet you have kept my word and have not denied my name.
Revelation 3:8

Dr. Henry Cloud says that if more singles said “Yes” they have a greater chance of finding, as the title of his book indicates, a date worth keeping. Some moments need a “Yes” in order to clear your path to your destiny.

Committees get a lot of bad press. I can understand why maverick (highly individual) leaders find it difficult to work with committees. Committees require working with people who have different ideas and viewpoints. They require listening, negotiating, disagreeing, compromising, and patience. This can be difficult for any strong-minded, gifted, driven, inflexible leader to work with. But, if a leader can learn to cooperate with others more often they will be all the richer for it. Of course, this growth principle of cooperation doesn’t just apply to leaders, it applies in the workplace, the sporting field, the classroom, and the home.
¶ Finally, brothers, rejoice. Aim for restoration, comfort one another, agree with one another, live in peace; and the God of love and peace will be with you.
Second Corinthians 13:11

3. Give away what you want.

It’s one of life’s counter-intuitives. The generous always seem to have enough and the stingy never do.
One gives freely, yet grows all the richer;
another withholds what he should give, and only suffers want.
Proverbs 11:24

The best way to keep somethings is with an open-hand. Most of us want more affirmation and encouragement. There are moments in life when others are looking to you for an affirming look or word. Don’t miss these moments. People who take these moments and share an encouragement with others tend to grow in their own self-confidence and emotional security. If you want more encouragement and affirmation look for those moments throughout your day when God brings those who need it more across your path.

4. Start throwing a rock rather than pebbles into the puddle.

There will come a moment when you are already busy but you will be presented with a need which you have the ability to meet. Not everyone is offered such a moment. Your immediate response may be to reject this request. Before you do, consider whether you are being asked to throw another pebble into the pond, or just a slightly bigger rock. That is, before thinking you have to spend just as much time again on this new responsibility, consider whether this is extra responsibility might actually fit your life’s mission. If it does, then just maybe, all you have to do is throw a bigger rock into the puddle rather than picking up more pebbles. That is, it might be more efficient – when it comes to making a bigger splash in the puddle – to throw a rock rather than some pebbles. To put it another way, when we know what our lives should focus on we may find that what looks to others as if we are doing many things, is actually just one thing which makes a splash the equivalent of many pebbles landing in the pond.
Dr. F.W. Boreham found in the early days of his pastoral ministry that his preaching was too dry dry, too theoretical, too disconnected from his hearers. He discovered that if he wrote his sermon out word-for-word before he preached it, he was better prepared in the pulpit because he had already selected the precise word to convey his message. He would preach the message without these notes, then go back and re-write those parts of it which needed adjusting. He then submitted these notes as an article to newspapers (both Christian and secular). Once a collection of these articles had been published he would select a group of them to be put into a book. Thus, it looked like he was throwing a pebble of sermon preparation, another pebble of preaching, another pebble of newspaper articling, and another pebble of book authoring. But in actuality, he was simply making a bigger splash with one rock rather than a handful of pebbles. Dr. Boreham was committed to reaching as many people for the Saviour as possible. His writing and preaching was his main means for accomplishing this mission. But over the years his rock got bigger as encompassed taking responsibilities as the Chairman of the Australian Baptist Foreign Missions, serving on the committee of the Victorian Baptist Union, and promoting the establishment of a Baptist Ministers and Missionaries training college. Again, these looked like he was throwing more pebbles into the puddle to make more splashes, but in reality he was throwing just one larger rock!
Jesus was on a single mission and had a clear focus. He “set His face to go to Jerusalem”. This was His rock. On the way to the Cross, the culmination of His mission, he healed the sick, raised the dead, preached to thousands, and trained His disciples.
¶ When the days drew near for Him to be taken up, He set His face to go to Jerusalem…But the people did not receive Him, because His face was set toward Jerusalem.
Luke 9:51

5. See your sacrifices as investments.

¶ I appeal to you therefore, brothers, by the mercies of God, to present your bodies as a living sacrifice, holy and acceptable to God, which is your spiritual worship.
Romans 12:1

There will come moments when you must pay a price in life. You go from being a single to forming a relationship. This involves a price. You go from being a couple to becoming parents. This involves a price. You go from being served to serving. This involves a price.
In these moments you can consider that price an expense or an investment. Ask any financial advisor and they will tell you that there is a world of difference between expenses and investments! Expenses make you poorer. Investments make you richer. One of the best investments you can make is time with people. This is one of the reasons why pastors are so rich in many respects. The time invested into people seeing them helped, trained, and developed, pays huge dividends. The time you invest in others may feel like a sacrifice but it’s probably an investment.
John Maxwell tells of how he grew his leadership training company by regarding sacrificing as investing. He needed another staff member, but the company didn’t have the finances to do employ someone. He decided that he needed to sacrifice his salary in order to employ their next staff member. Within a relatively short time of doing this the company was enabled to grow and take on more clients to point where it was able to pay both salaries. Dr Maxwell says that he went on to do this same kind sacrificing several more times – each time giving up his salary in order to hire a new staff member. He says, it was in these moments that both he and his company was able to grow and reap the dividend of his investment/sacrifice.
Leadership calibre is not measured by how many you lead. It is at least measured by your mission effectiveness. If your mission is to be a Christlike ambassador to those around you so that they might be drawn to the Saviour, then you are a leader.  All followers of Christ are leaders. Parents are leaders. Husbands are leaders. Managers are leaders. And if you want to grow as a leader you must recognise those moments when growth can occur.
It seems that God is committed to helping each of us grow toward maturity and be the best influencers on others that we can. The above growth moments might be summarised in the diagram below. Perhaps this might help you to realise how significant life’s seemingly fleeting moments are and help you to recognise what most don’t. 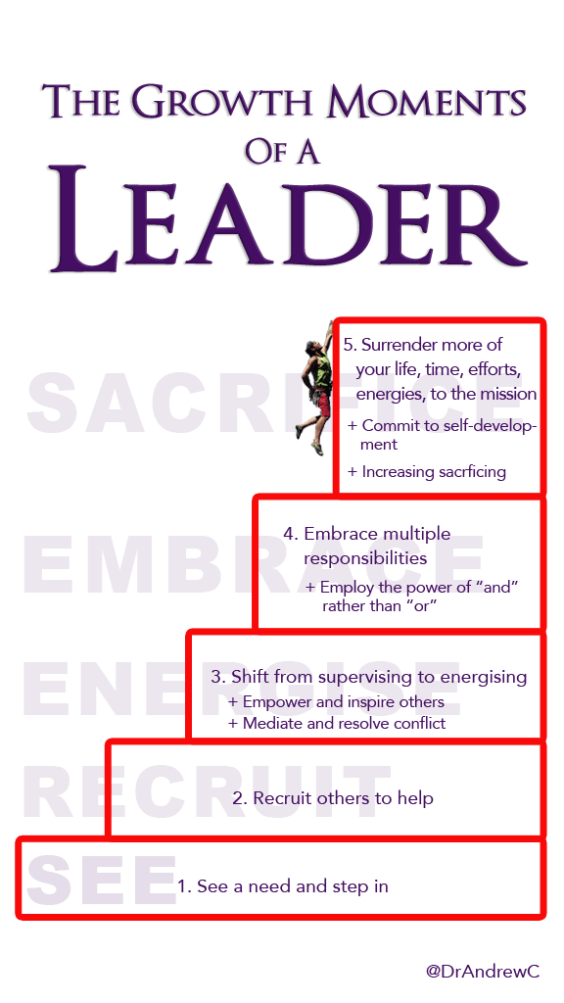 Posted by The weekly pastoral blog of Dr. Andrew Corbett at 08:24