A Watershed Moment For Tasmania

The appalling case of the prostitution of a twelve year old girl to over 100 men in Hobart Tasmania has outraged Tasmanians. This outrage has intensified in the last few days as it now appears unlikely that any charges will be laid against the men involved in hiring the girl. It's cases like these which serve to illustrate our intuitive sense of justice and especially when something is obviously unjust. The Director for Public Prosecutions (DPP) has stated that there may not be sufficient evidence to proceed with charges against the hirers of this girl. To be sure, based on what Mr Ellis has said, this would indeed be a difficult case to prosecute. But prosecute they must. That's why this is a watershed moment for Tasmania. 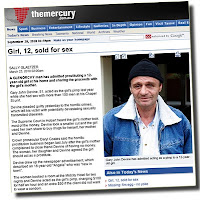 What is it about this case that riles most Tasmanians? While we joke about sex, entertain ourselves with sexually provocative films and music, read with interest about the "sex lives" of celebrities, and sponsor a multi-billion dollar para-sex industry (Porn), yet we are still disgusted when sex - even consensual sex - results in abuse. And so we should! This particular case is a good example of how we all share an intuitive knowledge of right and wrong - even though we may not be able to define what it is that is precisely 'immoral'. But sometimes, even Supreme Court Justices share our common inability to define what constitutes as "sexually immoral" -


In 1964, Justice Potter Stewart tried to explain "hard-core" pornography, or what is obscene, by saying, "I shall not today attempt further to define the kinds of material I understand to be embraced . . . [b]ut I know it when I see it . . . "[1]

This case will be difficult to prosecute because, according to Mercury Reporter Sue Neales-


Director of Public Prosecutions Tim Ellis is believed to be reluctant to charge clients of the child prostitute with the crime of under-age sex because of a lack of admissible evidence...But Mr Ellis believes that based on similar cases interstate and the evidence collected by Tasmania Police, a court would be unlikely to convict the men...The fact the girl was just 12 at the time the 120 men had sex with her is not by itself sufficient for charges to be laid.  Section 124 of the Criminal Code includes a sub-section making it a defence to anyone charged with having sex with a person under the age of 17 to argue that they believed on reasonable grounds that the person was an adult. In police interviews, most of the child's clients are believed to have claimed they thought the girl was older than 18.  Others claimed that while their names were in her appointment diary, they never turned up for the booking or, if they did, did not have sex with her.  "Sex With Girl Culprits To Get Off",    SUE NEALES   |   September 25, 2010 12.01am

WHY THIS CASE MUST PROCEED

This 12 year old was pimped by her Mum and her Mum's 'boyfriend', Gary Devine. The girl's 15 year sister was the one who recorded and managed the appointments. Both the Mum and Mr Devine have now been jailed for 10 years. But the men who also perpetrated the crimes may never be prosecuted. This sends a very, very bad message. It also raises questions about the purpose of judicial prosecution and the legislation such prosecutions are based on.


In this particular case, the services of the girl were advertised in a newspaper. The ad was made to sound like the girl was 18 and available as an "escort." Beyond Abuse spokesman, Mr Steve Fisher, rightly said that the 100 men should be charged (Mercury, Bruce Mounster's report: Anger At Child Sex Case End, 27th September 2010). But bewilderingly, he called for the "Sex Industry" to be de-criminalised and regulated-


Mr Fisher called for the decriminalisation and regulation of the sex industry.
Efforts by the Government to legalise the trade failed to get Upper House support in 2003.
The Government instead banned brothels, while allowing sex workers to work privately from hotel rooms.
"We need some form of regulation so they know what's going on where," Mr Fisher said.

One wonders whether this same principle (Since we can't stop it, and even though we know it's bad, we should at least control it by regulation) should also apply more broadly in society to other areas of hard-to-control criminality? How about we regulate the House-Robbery Industry? After all, our present Legislation prohibiting it doesn't always stop it! Soaring into the stratosphere of bewildering reactions to this particular case is a comment by a Hobart "Madam", Pam Browne who incredulously said-


In May, former Hobart brothel madam Pam Browne said that if Tasmanian sex workers had been licensed, as in other states, the 12-year-old's minders would have been prevented from advertising. [Mercury]

What Madam Browne, who has been operating her Tasmanian brothel illegally, has said is, if there was a law prohibiting these criminals from advertising the services of an unlicensed prostitute in a newspaper, the ad would never have been placed. Someone might need to tell Madam Browne that there actually are laws now (and then) prohibiting what they were doing and they ignored them all! It is absurd to think that licensing prostitutes would "clean up" the "Industry". Yet despite this, astoundingly Ms Lara Giddings wants to act on the advice of Madam Browne and proceed with Legislation to decriminalise prostitution in brothels and regulate their activity.


A spokesman for Ms Giddings yesterday said the Government was working on a review of sex-industry laws announced in June. In June, Ms Giddings told Parliament it was important that people in the sex industry were protected. She said former attorney-general Judy Jackson's 2003 proposal would be used as a starting point for a Government discussion paper.

I was fairly involved in the proceedings a few years ago when the then Attorney-General, Judy Jackson, after reasonably considering all of the data, not only withdrew her Legislative Bill, but reintroduced the existing one with harsher penalties. What Mrs Jackson discovered through the Parliamentary Inquiry, and some of the data supplied to her, was that where ever Brothels have been decriminalised, legalised, and regulated, it has actually led to: (i) an increase in criminal activity; (ii) less safe conditions for those engaged in its activities; (iii) less hygienic conditions; and (iv) an increase rather than a decrease in the "Industry."And this case serves as a stark reminder about what the Parliament learned back then.

This case should proceed against the men who helped to perpetrate this crime. It is difficult, if not impossible, to accept that none of the men could be charged and convicted. Here are four good reasons for the DPP to prosecute this case-