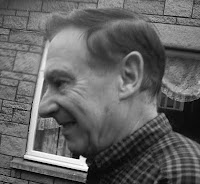 When I first arrived in Tasmania with my wife and (at that time) two small children, I didn’t know anyone. I had just taken up the pastorate of a very small semi-rural church of mainly elderly people. To support myself, I applied for a job with Australia Post (I had worked for Australia Post for several years in Melbourne while pioneering churches). Again, I didn’t know anyone in this new workplace of several hundred employees.

I had never seen a chaplain. I knew that the Australian military forces had commissioned chaplains who were regarded as Officers and served as a vital component in the emotional and spiritual well being of our troops, but I was largely unaware of any other context for chaplains. Then one day into the Delivery Centre walked the Chaplain. I had no idea who this well dressed man was. Charlie, a very rough veteran postie, lent across to me and said in an usually polite tone, that’s the chaplain…if you’ve got any problems you can talk to him…This chaplain clearly had the respect of Charlie (which, if you knew Charlie, you would know why his comments so surprised me).

When the chaplain approached our delivery team he was smiling and went out of his way to greet and talk with every worker. As he came to me he realised that I was new. He then took some extra time to enquire how I was settling in. He made no offer to be of assistance. He listened. At the meal break he came back over to me and talked more. He referred me to a resource centre, which I otherwise would never have known anything about. I followed through on his tip, and it proved to be of great help.

Over the ensuing months I talked more with Peter Pinder, the Australia Post chaplain, not because I had problems, but because he genuinely seemed interested. Even after I moved on from Australia Post I continued to have occasional talks with him. This connection lasted for 12 years and culminated when I was invited by the family to conduct his funeral at the Perth Baptist Church in 2007.

To me, Peter Pinder was the model chaplain. He was disciplined. He was educated. He was sensitive. He took initiative to reach out to others even when they didn’t immediately show their appreciation or make it easy for him. He never talked about his problems (it wasn’t until many years later that I realised that he had any problems). Although he was never paid well for his services, he managed his money very well and never complained about his pay- he obviously didn’t do what he did for the money. 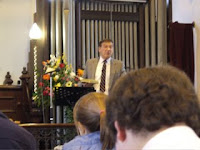 My family was privileged to visit with Peter and Isobel when he took up a pastorate in Scotland. Even then, although Peter was dealing with his own issues he took an acute interest in what I was up to. He already knew that I was a collector of FW Boreham books and prior to departing for Scotland had given me an FW Boreham book out of his own library. Several boxes of his belongings from Scotland arrived in Tasmania after his funeral. Among those boxes were three very rare FW Boreham books that Peter had tracked down in Scottish second-hand books, which he had marked For Andrew Corbett. Even in the midst of his own difficulties he was still exhibiting the prime quality of a chaplain: care and consideration.

Now when I think of a chaplain, I think of the Rev. Peter Pinder. I remember a man who was highly professional (he had a Master’s degree in religious education, which he rarely told anyone). He dressed like a professional- you could tell when he was on the job! He communicated well within his own sponsoring organisation (ITIM), with the management of the various industrial workplaces where he ministered, and with the frontline troops: the workers. He made time for everyone- even those who gave him a cold response.

His written communication reflected his intellectual rigour. He understood the difference between “their”, “there” and “they’re”. He knew how to use an apostrophe- that “Gods” is totally different to “God’s” as “Schools” is totally different to “School’s”. He wrote what he meant. He didn’t present his readers with ambiguous abbreviations such as “etc”. He was discreet and knew how to keep confidences.

With fewer members of the general population attending churches regularly, there is less opportunity for some people to benefit from the pastoral care these churches provide. This is perhaps the irony of our age. General church attendance has decreased but spiritual hunger has skyrocketed.

I think everyone needs a pastor. But the next best thing to a pastor is a chaplain: someone who takes an interest in you; listens; helps you to find meaning in the midst of your pain; promotes thankfulness in the good times; offers resources for navigating life better; and, assists you to make sense of the world and your place in it in a spiritually coherent fashion. Of course, not everyone is going to recognise their need for a chaplain. But even the staunchest atheists have been surprised by the help of a chaplain: a listening ear, a caring prayer, or a supportive program.

With the growth of chaplaincy in sporting clubs, schools, hospitals and industry, I hope that this new breed of chaplains are baptised in the “Peter Pinder Anointing”. I hope that they above all see themselves as professionals who are fulfilling a vocation- not just doing a job. (A professional fulfils a role. An unskilled worker exchanges hours for dollars.) I hope that these chaplains become more educated and learn to be craftsmen in care, communication, and confidences. I hope that chaplains exhibit a servant spirit to the management team of their workplace and learn what their hosts expect of them. I hope that chaplains become a part of the “soul” of their workplace through interacting in social functions, extra-curricular activities, and representing their school/hospital/club to the wider community.

The ministry of Peter Pinder lives on even though he has been promoted to his reward. And if I can encourage other Tasmanian chaplains to reflect his example, his ministry will live on even longer.