Shame on you George! 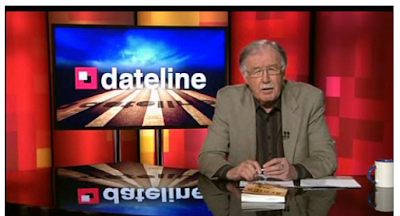 Dateline, aired on SBS Television Australia, is one of my favourite TV shows. I love seeing what's going on in other parts of the world. I don't want to be insular. Instead I want to be globally aware. That's why I like Dateline. It goes where no other programs go. It does stories that need to be told.

But lately, the very left of centre, George Negus has been pushing his atheistic agenda with even greater virility. This agenda has been camouflaged with two significant interviews about Climate Change. Aired June 7th, the first of these interviews was with a British Lord who ridiculed not the arguments of the "climate change sceptics" but the intelligence of the climate change sceptics. Whenever I hear this bankrupt reasoning, I immediately become suspicious of the ideas about to be presented. And it appears that I was not the only one to twig to this presentation of shallow logic. In the following week's show George Negus acknowledged that they had received the most correspondence they had ever had - with all the correspondents objecting to George's bad journalism and obvious lack of objectivity.

George then decided to buttress his previous interview with someone who was going to clinch the deal: Wangari Maathai. She is an articulate Ethiopian Nobel Laureate who is passionate about climate change and global warming.

At George's prompting she dismissed the 32,000 scientists who have signed a petition objecting to the idea that global warming is the primary and direct result of human activity in burning fossil fuels. These scientists have demonstrated that atmospheric carbon increases result from (rather than cause) global warming. Are they right? According to George Negus's previous interview, these particular scientists are akin to flat-earthers and are laughable. At least Wangari Maathai didn't revert to ridicule as her argument. Instead, she just avoided defending the notion all-together and proceeded on the assumption that she was right. And why did she think she was right? Rather than showing an indisputable link between fossil-fuel consumption and global-warming, she simply gave the anecdotal evidence for global-warming. This included expanding deserts, rising sea-levels, and increased famines.

Her solution? Plant more trees. To this we sing: Amen. And we should agree with her that even if the climate-change sceptics are right, more trees is not going to be a bad thing.

But how many people can detect the underlying worldviews behind the climate-change debate? Is the earth the result of highly random unordered chaotic events? If it is, then it is surely a highly fragile bioshpere that must be carefully sustained. But what if the earth is the result of a well-designed, sovereignly governed, well-ordered, creation event? In this latter worldview we are called to be good stewards of our ecologies but we worship a Creator who has made our world remarkably resilient and able to endure and recover from human abuse.

I have written a little more about the issue of climate-change and global-warming on my website [read].
Posted by The weekly pastoral blog of Dr. Andrew Corbett at 09:51