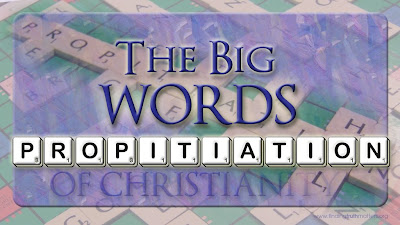 Sometimes simple concepts can only be best described with less than simple words. That is, if an attempt is made to explain something complex with inadequate terms, we are not being simple but simplistic. Being simplistic means that the fuller explanation is missing - thus the potential is: that because the explanation is insufficient the actual concept becomes misrepresented and therefore damaged.

For example, how do we describe God? If all we say is that God is love, we run the risk of being simplistic. Not even the Scriptures, which seems to default to simple concepts and language, leaves the reader with just this description. God is love, but He is much, much more than that.

How do we describe the salvation that God provided through Christ's redemptive work? In seeking to convey the heart of the Gospel, the New Testament uses a powerful (but not a simple word) to sum up the majestic work of salvation: propitiation. This word occurs four times in the New Testament and conceptually many more times than that in the Old Testament (where it is rendered as atonement).

It means that God's anger and wrath is vented on an atoning sacrifice (Jesus the Christ) so that the guilty who are called to be reconciled to God can receive mercy.

Romans 3:25 whom God put forward as a propitiation by his blood, to be received by faith. This was to show God’s righteousness, because in his divine forbearance he had passed over former sins.

It's not a simple word. And it's not a simplistic word. But it's a phenomenally profound word and concept: Propitiation. Thank God for it!
Posted by The weekly pastoral blog of Dr. Andrew Corbett at 13:47