The Christian Vote and the Federal Election 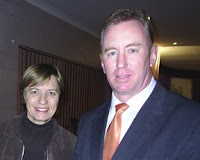 A few months ago I was interviewed by ABC television's program, 4 Corners, when Liz Jackson asked me whether I thought the "Christian vote" would have any bearing on the upcoming Federal election. My answer surprised her. I stated emphatically that I thought the Christian vote would determine the outcome of the election! She immediately questioned me again on this matter and I re-stated my answer. Now that the election has been and gone I can say "I told you so!" The Christian vote determined the outcome of the 2007 Australian Federal Election.

It has been widely acknowledged that the Christian vote was a significant factor in the outcome of the 2003 Federal Election. For the first time in a long time several elected parliamentarians unashamedly declared their Christian commitment. The entrance of the Family First Party caught many commentators off guard and wondering how such a new political party could gain around 2% of the national vote in its first foray into national politics.

What these political observers had failed to detect was the level of frustration among middle Australians who were fed up with hostile, adversarial, politicking and extreme minority groups pushing for extreme legislation changes on marriage, drugs, crime, abortion, euthanasia and terrorism. The problem was compounded because those arguing for moral absolutes were generally on the Conservative side of politics and coincidentally generally happened to be Christians. Their Christian values then became the target for those on the other side of the politics which tended to sway the sympathies of middle Australia to the Conservatives.

At the 2003 Federal Election the choice was stark for Christian voters: Prime Minister Howard an unapologetic church-going Christian, or, Mark Latham an unabashed atheist who thought little of Christian values. But this election was different...

Kevin Rudd has little in common with Mark Latham. And perhaps his greatest endorsement as a good bloke was when Mark Latham published his biography and referred to Kevin Rudd as "a terrible piece of work". Coming from Latham that was ironically glowing praise! Kevin Rudd did much behind the scenes to appease the Christian vote. He met privately with many national church leaders and asked them what Labor had to do to win their support. Being a forthright church-going Christian, Kevin Rudd was not prepared for Christians of Australia to continue to think that being a Christian voter meant being a Conservative voter. He challenged this as he spoke to church groups and Christian gatherings around Australia. He especially courted the Pentecostals and met with nearly all of the leading Pentecostal movements to share his vision for Australia.

Because Kevin Rudd shares John Howard's Christian commitment it was inevitable that many of his value-laden policies would closely resemble the Prime Minister's. This then led to a huge tactical problem for the Conservative political strategists. And this is where they made a fatal political mistake. Instead of challenging the content of Mr Rudd's policy agenda (which they were essentially neutralised from doing, eventually causing them to claim in frustration that Kevin Rudd was a "Me too!" candidate) they made their attacks personal and nasty. They tried to equate the words "Trade Unionist" and "inexperienced" with "evil". It didn't go down well with the Christian vote. It looked desperate.

It was contrasted with Kevin Rudd's message of "new leadership" which would focus on educating children better, caring for the marginalised, and making workplaces fairer. This seemed to echo some very traditional Christian values. Added to this, Kevin Rudd was careful not to discuss issues of "Gay" marriage, abortion, euthanasia which most Christians find non-negotiable. But then there was the environment...

The Conservatives had for a long time generally failed to appreciate the dire warnings of scientists regarding the reality of the affect of carbon emissions on Climate Change. Kevin Rudd didn't.

In Tasmania there was no greater environmental issue than the proposed Pulp Mill. This had become an extremely provocative environmental issue which seemed to have the support of both State and Federal Conservatives. Kevin Rudd somehow seemed to distance himself from the proposal and process and thereby left it up to the Conservatives to argue why the Pulp Mill should go ahead. Some Christian voters saw through this though and despite almost insurmountable battles with their consciences voted Green instead either major Party (perhaps not realising that a vote for the Greens was ultimately a vote for the Pulp-Mill-supporting Labor Party). This was evidenced around Tasmania where Christian ministers were seen handing out Greens How-To-Vote cards on Polling Day. The Greens then gained the largest proportion of the Tasmanian Christian vote they have ever received which has seen their Lower House vote and their Senate vote go to record levels.

Mr Rudd courted and it seems eventually won the Christian vote. Christians want good economic management where the marginalised are looked after and the entrepreneur can flourish simultaneously. Christians want our borders protected but not at the expense of incarcerating already traumatised children behind razor-wire fences. Christians want development but not at the expense of poor environmental stewardship. Christians want everyone looking for a job to find one but not by the compulsory forfeiting of weekends, penalty-rates, or reasonable job-security. Christians want the sacredness of those who bear the image of God from conception to be afforded the right to life and that the institution which delivers this to be a unique privilege between one man with one woman for life. If Mr Rudd has any mandate he at least has a mandate from the Christian vote to deliver this. Christians should pray that he does.