WHY EXCUSES CAN BE BAD, REALLY BAD, FOR YOUR SOUL 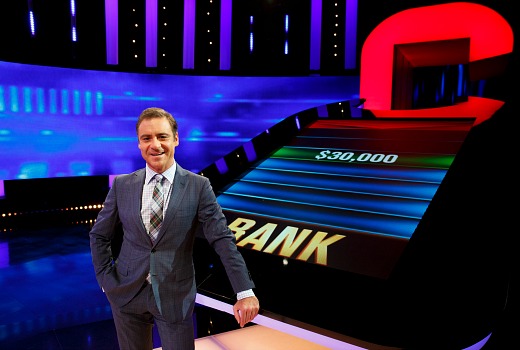 I happened to walk past a TV when there was one of those quiz game-shows on. The compere’s question was,  “What is the most common excuse?” The most common answer was, “Sorry I can’t come, I’m not well.” There are variations of this excuse that most of us always use, especially if you’re a parent. The propensity to make excuses for things we don’t want to acknowledge or accept dates back to Adam. When God visited the Garden of Eden just after Adam and his wife Eve had betrayed God, the first thing that Adam did was to make an excuse by blaming Eve. It seems that from the beginning, when people have resisted God’s will, they have made excuses for it. Perhaps this is why Jesus addressed excuse-making directly in His parables. As we read His parables we can not miss His frustration at human excuse-making and must wonder why He was just so frustrated?

This parable reveals the heart of God; and, Christ was telling us how upset His Father feels when people make excuses in response to His gracious invitation to dine with Him. But this is not the end of the parable.

THE ESSENCE OF AN EXCUSE 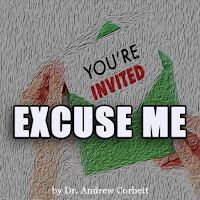 The essence of an excuse is the word, no. If we get invited to a party that we don’t to go to and we make a polite excuse to decline the offer, in essence we are saying “No, I will not come to your party.” This is the gist of the parable that Christ told in Luke 14 about His Father who sent His Son as His Servant to personally invite those who had already received an invitation to come to a great banquet. (It’s interesting how Jesus describes His Father’s heaven as a great banquet.) By saying “No” to the great banquet invitation those who were declining this invitation were saying that they had a better offer. What offer could be better than dining with the Source of Life, Joy, Peace, and Power, as His special guest in His luxurious mansion? What happens next in this parable also says a lot about how God feels when people make excuses to decline His offer to dine.

So the servant came and reported these things to his master. Then the master of the house became angry and said to his servant, ‘Go out quickly to the streets and lanes of the city, and bring in the poor and crippled and blind and lame.’ And the servant said, ‘Sir, what you commanded has been done, and still there is room.’ And the master said to the servant, ‘Go out to the highways and hedges and compel people to come in, that my house may be filled. For I tell you, none of those men who were invited shall taste my banquet.’”Luke 14:21-24

IT SEEMS THAT SOME EXCUSES CAN BE HARMFUL TO YOUR SOUL

People sometime ask, “How could a good, loving God send anyone to Hell?” Perhaps we might respond with a better question (and one easier to answer), “Why would any rational, reasonable, person decline God’s offer of eternal forgiveness, bliss, supreme joy and fulfilment, and salvation from eternal condemnation — and willingly choose to experience the consequences of their rebellion against God forever and ever?” I’ve even heard of people who have made the excuse that they cannot accept God’s offer, because the consequences of not doing so sound so incredibly unfair! But the truth is, this is an extremely weak excuse because in reality the only consequence that is incredibly unfair is God’s offer of eternal life/forgiveness/joy/peace/happiness/adoption! This offer is incredibly unfair in our favour! Why unfair? Because fairness has to do with deservedness (it’s only fair that you get what you deserve). But God’s offer is infinitely unfair because none of us deserve it! We have done nothing to deserve it. We can do nothing to deserve it. We are in fact undeserving of it! The Bible calls this unfairness, grace. Someone who was profoundly effected by God’s grace, wrote this-

¶ For while we were still weak, at the right time Christ died for the ungodly. For one will scarcely die for a righteous person—though perhaps for a good person one would dare even to die—but God shows His love for us in that while we were still sinners, Christ died for us. Since, therefore, we have now been justified by His blood, much more shall we be saved by Him from the wrath of God. For if while we were enemies we were reconciled to God by the death of His Son, much more, now that we are reconciled, shall we be saved by His life.Romans 5:6-10

Of course, some excuses are quite reasonable. Your priorities should help you to determine which of two invitations involving the same time-frame you should accept and which one you have to therefore decline. If you’re invited to your child’s wedding at the same time as someone has invited you for a coffee, hopefully you’ll excuse yourself from going for coffee. But your highest priority should determine your highest quest. Our highest quest must be to please and know the God who made us for Himself. In C.S. Lewis’s classic book, Mere Christianity, he concludes by discussing man’s greatest quest –

“It is even doubtful, you know, whether the whole universe was created for any other purpose. It says in the Bible that the whole universe was made for Christ and that everything is to be gathered together in Him…What we have been told is how we men can be drawn into Christ – can become part of that wonderful present which the young Prince of the universe wants to offer to His Father – that present which is Himself and therefore us in Him. It is the only thing we were made for.”Excerpt From: Lewis, C.S. “Mere Christianity.” Apple Books.

And for those whose best excuse for not accepting God’s lavish offer of eternal life and bliss is that God did not reveal Himself to them, you might need to come up with a better one based on what God has said in Romans 1 –

For His invisible attributes, namely, His eternal power and divine nature, have been clearly perceived, ever since the creation of the world, in the things that have been made. So they are without excuse…Therefore you have no excuse!Romans 1:20, 2:1a 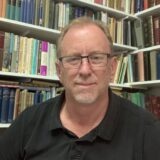 Posted by The weekly pastoral blog of Dr. Andrew Corbett at 18:14