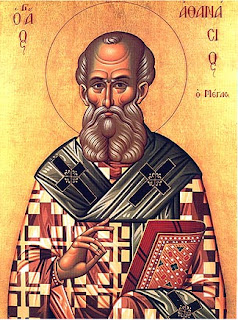 It was Athanasius (who lived in the fourth century) who first pointed out that if there was God it would be reasonable to assume that He would reveal Himself by communicating with His creation. Christians believe that God has indeed communicated with people through the Bible. They consider the 66 books which make up the Bible are inspired by God and since they are inspired by God, they are without error ("inerrant"). Ask the average Christian and they'll probably confirm this, but ask them why they believe this and they may not be able to tell you. If that's you, you might want to read this.

The entire case for Christianity stands or falls on one of its central claims - that the Bible is uniquely and divine inspired and is without error. Christians have three main reasons for believing this. This may surprise those who have accepted the non-Christian mantra that faith is what you need to believe something when there is no evidence to believe it. But this is not what the Christian means by 'faith'. Rather, 'faith' is akin to 'trust', for the Christian. Trust is only ever trust when it is grounded in good reasons. Therefore, 'blind-faith' bears no resemblance to the kind of faith the Bible prescribes.

¶ Now Jesus did many other signs in the presence of the disciples, which are not written in this book; but these are written so that you may believe that Jesus is the Christ, the Son of God, and that by believing you may have life in his name.
John 20:30-31

Jesus of Nazareth asserted that the Scriptures were uniquely authoritative and divinely inspired (Jn. 10:35; 13:18). It's not that the Bible contains the Word of God - it is the Word of God. Jesus claimed that He and the Father were "one" (John 10:30). Thus, Jesus is the Inspirer of the entire Bible - including all of the Old Testament. He shocked His original audience claiming that everything in the Old Testament pointed to Him -

And beginning with Moses and all the Prophets, he interpreted to them in all the Scriptures the things concerning himself.
Luke 24:27
You search the Scriptures because you think that in them you have eternal life; and it is they that bear witness about me,
John 5:39

Someone may accuse me of 'circular reasoning' by citing Jesus as proof of the divine inspiration of the Scriptures. But I am not at this stage claiming that the source of what Jesus said is divinely inspired. I am only (at this stage) treating the statements by Christ to be historically valid and verifiable. The character and integrity of Jesus The Christ is wedded to His repeated claim that the Scriptures were the 'word of God' which 'could not be broken' (Jn. 10:35) 'must be fulfilled' (Jn. 13:18) and 'spoke of Himself' (Lk. 24:27).

To claim that Jesus was a great moral teacher and then attempt to assert that what He taught was misguided or wrong is to deny the actual claim and make a contradictory claim: that Jesus was misguided and wrong. Because the historical account weighs so heavily and is so universally acknowledged, that He was a great moral teacher with impeccable character, it stands to reason that what He said was correct.

2. JESUS PREDICTED THAT THERE WOULD BE NEW TESTAMENT SCRIPTURES

Jesus told His disciples that He would send the Comforter, the Holy Spirit, who would bring all (these) things to their remembrance. Why? So that they could be accurately recorded. John the Apostle, aware of this, concluded his account of the life of Jesus by saying that these things have been written so that you might believe and by believing you might receive eternal life (Jn. 20:31). Jesus assured His apostles that the Holy Spirit would be sent to lead and guide them into all truth (Jn. 16:23) so that an accurate and inspired account of the New Testament could be recorded and transmitted. The subsequent records of Christ's life were in circulation in the first century far earlier than we used to believe. Up until fairly recently it was commonly held tha the New Testament books were completed by 95AD, compiled early in the Second Century then recognised as "Canon" by the Fourth Century. But we now know that this is not the case. Rather, the Gospels were written and in circulation by 45-50AD and that the last book of the Bible, Revelation, was written and in circulation by 65AD. The Gospels and The Revelation both record the prophecy of Christ that the Temple in Jerusalem would be destroyed within 'a generation. If the Gospels or The Revelation had been either written or compiled after the destruction of Jerusalem in 70AD, it is utterly inconceivable that this wouldn't have been included in the accounts.

Added to this, if the accounts in the Gospels (the record of the teaching, life and work of Jesus) had been either fabricated or embellished and were in circulation within the living memory of the eye witnesses to the events - these eye-witnesses would have protested, published rebuttals, and discredited these accounts. But no such accounts exist. None. Not one.

There is mounting evidence that the New Testament books were published, distributed and circulated widely by 80AD. The work of Dr Daniel B. Wallace from The Center For The Study of New Testament Manuscripts has recently announced the discovery of a fragment of the Gospel of Mark dated at 80AD. That is, this fragment demonstrates that this Gospel was widely in circulation by at least 80AD, which adds weight to the historical evidence for it being in circulation by as early as 50AD. Professor Wallace also points out that we have over 5600 Manuscript copies of the New Testament documents which date from the Second Century. This enables those specialising to textual science to very accurately determine what the earliest New Testament manuscripts recorded and that the New Testament translations that we have today are consistent with these original manuscripts and reliable. The twenty seven books of the New Testament were recognised very early as being unique from other documents and began appearing in lists as early as the Second Century. This list of the 27 New Testament books was confimed or assumed by numerous Ecumenical Church Councils from Nicea. The books accepted as the Canon of the New Testament became the basis for the Church, its role, its mission and its officers. This historical fact should instantly dismiss the false claim that it was the Roman Catholic Church which instituted the Canon of Scripture at the Council of Trent (1545) and buttress the position of the Reformers who taught "Sola Scriptura" (the Scriptures alone - the Bible has the highest authority on earth to reveal the Word, ways and will of God).

3. THE NEW TESTAMENT AUTHORS WERE AWARE OF THEIR DIVINE INSPIRATION

¶ To the married I give this charge (not I, but the Lord)...
First Corinthians 7:10
If anyone thinks that he is a prophet, or spiritual, he should acknowledge that the things I am writing to you are a command of the Lord.
First Corinthians 14:37

All Scripture is breathed out by God
Second Timothy 3:16

our beloved brother Paul also wrote to you according to the wisdom given him,
as he does in all his letters when he speaks in them of these matters. There are some things in them that are hard to understand, which the ignorant and unstable twist to their own destruction, as they do the other Scriptures.
Second Peter 3:16 The Scriptures' divine inspiration is confirmed by extraordinary fulfilment of its prophecies. The Old Testament 'types' (animal sacrifices, ceremonies, rituals, Laws) all prophetically foreshadowed Jesus and His redemptive work. The prophet Isaiah gave an extraordinary set of predictions about the coming of Jesus in Isaiah 52-53. There are over 40 predictions about the birth, life, work, death, and the resurrection of Jesus in this section. Each of them were fulfilled by Jesus. For a long time this fact was dismissed by critics of the Bible by claiming that "Isaiah" was actually written after the life of Jesus - which is how the author was able to predict His life with such uncanny accuracy. But then in the 1940s, scrolls of the prophet Isaiah (with these particular prophecies) were discovered in sealed earthenware containers and were dated to hundreds of years BC! Thus, the prophecies of Christ found in Isaiah 52-53 can be irrefutably shown to historically pre-date their fulfilment. Of course, Isaiah's prophecies are just one of hundreds of such prophecies which have been fulfilled.

The Scriptures are also verified by history. The major events of the Exodus, King David, the Babylonian seige, were all once dismissed as either myth (never happened) or legend (embellished accounts of what actually happened). But over time archaeological evidence has lent support to each of these major historical Biblical events. And perhaps, for some, the most persuasive corroborating proof of the Bible's divine inspiration is that its experience claims can be put to the test. When the Bible describes the world and the human condition, it does so accurately and every human heart can attest to it. The Bible shows us not only that there is something with the world, but whythere is something wrong with the world. But it then goes beyond this and addresses the unscratched itch, the deepest ache, and the greatest longing of every human heart by revealing God's gracious provision of the answer to every man, woman, boy and girl who has ever lived. This solution is utterly testable. The Bible points us back to God in prayer and guides us to confess our sin, ask for forgiveness, and receive the gracious offer of God's forgiveness wrought by the sacrifice of Jesus Christ. It then goes on to explain how we can find true happiness, ultimate peace, and the significance and fulfilment we are all looking for.

It should no surprise then, just how highly all Christians regard the Bible. It takes the central place in our worship, our Church service, and in guiding our lives. When it is read, it is not merely arresting our minds, it is arresting our souls and progressively transforming us. Recent research by Arnie Cole and Michael Ross, has revealed a dramatic difference in the lives of people who read their Bibles at least 3 times a week compared with those who don't.

It's one thing to claim that the Bible is divinely inspired, but it's another thing altogether to be inspired to read it and apply it!

Ps. Andrew
Posted by The weekly pastoral blog of Dr. Andrew Corbett at 16:24