GOD IS GOOD, BUT NOT "NICE"

strengthening the souls of the disciples, encouraging them to continue in the faith, and saying that through many tribulations we must enter the kingdom of God.
Acts 14:22 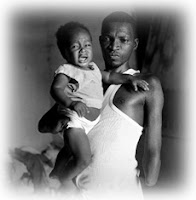 Jesus said that it is better to enter into the Kingdom of God without both eyes than to see perfectly and end up in Hell. Losing eyes or limbs is not nice, but might be good...And it seems that history bears out that God's dealings with those He elects to salvation often means that they are deprived of certain niceties (like having both eyes and all limbs) and that they even suffer (Mark 9:47) . The problem of suffering while following an All-Powerful and Good God has perplexed people for thousands of years. While we may not comprehend why God would allow people to suffer, we can most certainly apprehend two facts: (i) God is sovereign, just and good, and (ii) People who suffer often testify that are the better because of it.

I find the entire chapter of Romans 8 most helpful and comforting in trying to understand this mystery of why God would allow people to suffer. "For I consider", says the battle-hardened apostle Paul, "that the sufferings of this present time are not worth comparing with the glory that is to be revealed to us." (Rom. 8:18) Paul goes on to say that in the midst of our confusion, we must "wait patiently" (Rom. 8:25) and look to the Holy Spirit to give us strength (Rom. 8:26). He then culminates in the diamond-verse of pastoral counsel when he says-

And we know that for those who love God all things work together for good, for thse who are called according to his purpose.
Romans 8:28

It's hard for us to think of "good" and not think of "nice". It's therefore hard for us to think that a Good God would allow things that are not nice. But this is not the Biblical portrayal of God's goodness. Nice is obsessed with "now" benefits. Good is about "eternal" benefits. God will will people to suffer if it is for the ultimate good. The greatest example of this is the death of His own Son on the Cross. It might be nice to have a good think about that.